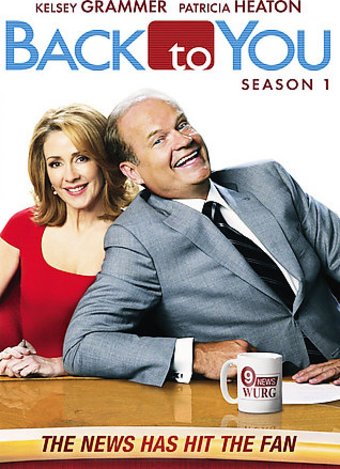 Three seasons after retiring one of the most iconic characters in television history and ending a twenty-year run across two hugely beloved sitcoms, Kelsey Grammer returns to the tube. Here, though, newsman Charles Darling has all the sophisticated narcissism of Dr. Frasier Crane and none of his refinement. Two years after signing off as one of TV's favorite housewives, Patricia Heaton also makes a comeback on the telly. But in this show, newswoman Kelly Carr has all of EVERYBODY LOVES RAYMOND's Deborah's spunk and none of her reservation. In the snappy sitcom BACK TO YOU, these two television titans are quarrelsome co-anchors at a local Pittsburgh news station. Or at least they were, before Darling left 10 years ago for a high-profile anchor position in Los Angeles. But now, on the heels of an obscenity-laden, YouTube-ready public outburst, the newsman must head abaft to Pittsburgh and into the resentful, acrimonious arms of Carr, where the two get right back to bickering behind the desk in no time flat. Carr has a secret that Darling should know about, though...one that's ten years old and about four and a half feet tall. With a crackerjack supporting ensemble including Ty Burrell (THE DARWIN AWARDS), Josh Gad (THE ROCKER, 21), and Fred Willard, the 17-episode first season of BACK TO YOU is a can't-miss TV comedy collaboration.