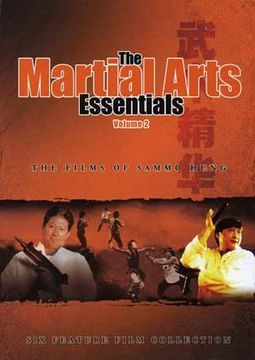 GAMBLING GHOST: It's Sammo times three as he takes on multiple roles. Fat Hung (Sammo) must raise a million dollars to pay off a debt of it's his life. Superb action featuring the Wing Chun style he used in both Warriors Two and Prodigal Son.

INCREDIBLE KUNG FU MASTER: What to do when a student has two masters? Kung Fu ace Tung Wei has this problem as he trains in the styles of Hung Gar and also Wing Chun. When a rivalry develops between the two masters Tung goes to the one man who can help him - Sammo. An absolute classic!

MANDARIN MAGICIAN: Old school brutal kung fu is the name of the game in this bone crushing masterpiece. Filmed in Thailand the Mandarin Magician is Larry Lee, a real life master who together with Sammo create some of the most vicious action ever!

BURGER COP: Sammo teams up with Yuen Biao and future mega star Takeshi Kaneshiro (House of Flying Daggers) in a film Sammo produced, starred and directs. This cop thriller has his protege Bob Samuels showing off his talents. Action from start to finish!

RETURN OF THE DRAGON: Sammo is a down on his luck fighter who has resorted to grifting in order to make a living. He gets caught and winds up in prison where he finds redemption and the will to fight again. A great film with some of Sammo's best action.