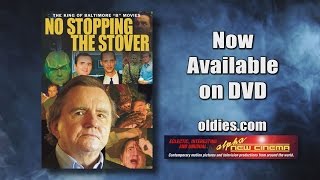 The life of Baltimore B-movie legend George Stover is profiled in this all-new, in-depth documentary!

Born and raised in Baltimore, George Stover spent his early years immersed in cult fandom, even starring in an amateur stage production based on Star Trek after the series' cancellation. But it was when John Waters cast him as the prison chaplain who escorts Divine to the electric chair in Female Trouble (1974) that Stover's career truly started. "The Pope of Trash" subsequently immortalized George as the husband who is smothered to death by the family maid in Desperate Living (1977).

Stover then hooked up with another underground Maryland filmmaker, Don Dohler, who featured him prominently in his cult classics The Alien Factor (1976), Fiend (1980), Nightbeast (1982), The Galaxy Invader (1985) and Blood Massacre (1988). (Scenes from Galaxy Invader were even lampooned in an episode of the popular cable comedy series Mystery Science Theater 3000, a sure sign of cult success.)

George subsequently appeared in movies as diverse as Attack of the 60 Foot Centerfold (1995), The Death of Poe (2006), Terror in the Pharaoh's Tomb (2007) and Call Girl of Cthulhu (2014). As a new century dawned, Stover had become a father figure to the young filmmakers in the growing indie scene in Baltimore. Their world was thrown into tumult when Stover was shot during a robbery in 2012. The story of his recovery is just as amazing as his rise to the throne of king of the B movies...

PLUS BONUS EPISODE OF 'THE KATE SHOW' Guest-Starring George Stover.