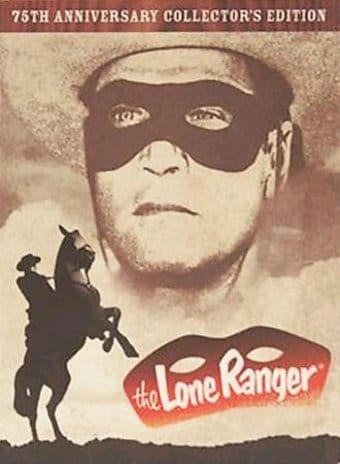 THE LONE RANGER, starring Clayton Moore, has provided a heroic figure for generations in its do-gooder team of the Lone Ranger and his Native American companion, Tonto. On their horses Silver and Scout, the duo ride across the West looking for situations where they can help people and bring justice to the land. This definitive set includes the first two seasons--that's 78 episodes--of the original LONE RANGER series, as well as a recording of the original radio broadcast, the 1960s cartoons, a classic episode of LASSIE featuring the Lone Ranger, and much more.


this is a dvd that reminds me of the my child hood,very funny times as a kid. It also is away to relate to my grand kids the fun we had in simple non bloody shows.


I'm watching it a second time.It brings back goodtimes at home when very young.Our family would have the radio/TV on for us. The film and sound is very good.Its worth getting. Fred From Austin