Entertainment Weekly: "...his guitar and vocal work on GREATEST HITS (especially on the howling `Texas Flood') is appropriately the stuff of legend..." - Rating: B 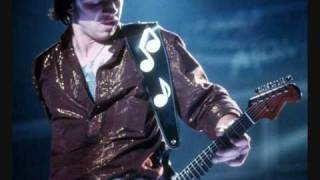 Full performer name: Stevie Ray Vaughan & Double Trouble.
Stevie Ray Vaughan & Double Trouble: Stevie Ray Vaughan (vocals, guitar); Reese Wynans (keyboards); Tommy Shannon (bass); Chris Layton (drums); Doyle Bramhall.
Producers include: Stevie Ray Vaughan, Richard Mullen, Jim Gains, Chris Layton, Tommy Shannon.
Includes liner notes by Dan Forte.
Liner Note Author: Dan Forte.
When Stevie Ray Vaughan's helicopter crashed in August 1990, the world lost more than just a musical giant. Stevie Ray's short life contained all the elements of a hero's journey--from obscurity, through adversity, to glory. His meteoric rise in the public's eye began after a stellar performance at the 1982 Montreaux Jazz Festival, which led to a gig with David Bowie (on LET'S DANCE) and a demo that ended up becoming TEXAS FLOOD, an outstanding debut from one of the most influential blues artists ever to call Texas home.
Five years after his passing, Vaughan is honored with a GREATEST HITS collection, gathering songs from each phase of his recording career. From that first album comes the seminal "Pride And Joy," a hard-swinging rhythmic twister revealing Stevie Ray's prowess on the guitar. The man was a monster--simultaneously playing sweaty rhythms and soulful leads, while also handling vocal chores. When he moans that "it's flooding down in Texas, all the telephones lines are down," the depth of his emotion makes you feel the water rising. The guitar solo that follows--reaching, bending, testifying--can only come from someone truly in touch with his soul, and with the soul of his Stratocaster. It elicits a stunning array of colors, with a tone as warm and gruff as all of the Lone Star state.
After TEXAS FLOOD (1983), COULDN'T STAND THE WEATHER (1984) and SOUL TO SOUL (1985), Vaughan took control of his life and confronted his substance abuses. GREATEST HITS kicks off with a high-energy, blues-shuffle rendition of "Taxman," recorded on his first trip to the studio since becoming sober, and in Stevie Ray's hands The Beatles' tune sounds as Texan as the man himself. 1989's IN STEP was further testimony to his recovery and to his conquest of demons that seem to haunt every legendary blues man. GREATEST HITS is the soundtrack to these struggles and triumphs.

Stevie Ray Vaughan
The Sky Is Crying
$8.20
Add to Cart