Count Dracula returns to face Frankenstein's monster and the Wolfman in this all-new horror feature. 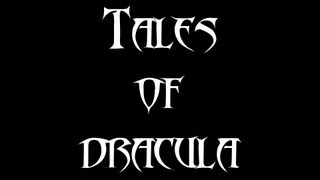 Count Dracula, Frankenstein's monster, and the Werewolf join forces in this haunting tribute to the Universal horror films of the 1930s. The Lord of the Vampires has returned to his native soil, choosing an innocent young virgin as his new bride. Victoria Frankenstein, the granddaughter of the original monster-maker, has been using Dracula's blood in profane experiments. Injecting it into her grandfather's dormant creation, she revives the Monster. And when the Werewolf arrives in Transylvania looking for a cure, the stage is set for an explosive confrontation between the three most fearsome creatures to ever walk the Earth.

A hit at the Monster Bash Movie Conference and Film Festival, Tales of Dracula is the first feature from writer-director Joe DeMuro. Wayne W. Johnson (Dracula) has a recurring role on the popular webseries Star Trek New Voyages. Dwight Kemper is an accomplished character actor, mystery novelist, and film historian who has been nominated for the Rondo Hatton Classic Horror Award three times. With outstanding creature FX by make-up master Ron Chamberlain, moody black & white cinematography, and earnest performances, Tales of Dracula is dedicated to all aficionados of the Golden Age of Hollywood horror.

92%off
State of Mind TOP 25 Bestselling DVD
$1.58 Spring Sale
Add to Cart
(50+)
Film Collectors & Archivists: Alpha Video is actively looking for rare and unusual pre-1943 motion pictures, in good condition, from Monogram, PRC, Tiffany, Chesterfield, and other independent studios for release on DVD. We are also interested in TV shows from the early 1950s. Share your passion for films with a large audience. Let us know what you have.
How to Order
Shipping Rates & Options
International Shipping
Return Policy
Request a FREE Catalog
Order Items by Catalog
View Catalogs Online
Safe Shopping Guarantee
Buy a Gift Certificate
About OLDIES.com
Customer Reviews
Contact Info
Privacy Policy
Send Feedback
Login
Forgot Password?
Sign Out
Email Subscriptions
Redeem Gift Certificate
To contact customer service, email us at Customer-Service@OLDIES.com
Closed for COVID-19
Portions of this page © 2020 TiVo Corporation. For personal non-commercial use only. All rights reserved.
© 2020 OLDIES.com and its affiliates and partner companies. All rights reserved.