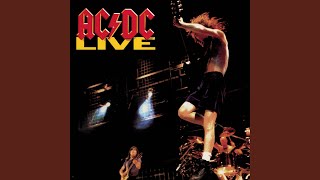 This is a Hyper CD, which contains regular audio tracks and also provides a link to the artist's website with the help of a web browser.
This edition also comes with a pull-out, 2-sided poster.
AC/DC: Brian Johnson (vocals); Angus Young, Malcolm Young (guitar); Cliff Williams (bass); Chris Slade (drums).
All tracks were recorded during AC/DC's 1990-1991 world tour. Originally released as Atco (92212). The 2003 edition of AC/DC LIVE includes liner notes by Don Kaye.
All tracks have been digitally remastered.
Personnel: Brian Johnson (vocals); Malcolm Young, Angus Young (guitar); Chris Slade (drums).
Audio Mixer: Ken Lomas.
Recording information: World Tour (1990-1991).
Photographers: George Chin; Serge Thomann; Scott Weiner; Larry Busacca; George Desota.
Arrangers: Malcolm Young; Angus Young .
AC/DC reclaimed its status as gutbucket rock n' rollers to be reckoned with on this searing double-disc live set. The year was 1992, more than 15 years after the group's first recording. By this point, the band was approaching middle age, a time when most rockers settle into the lazy comfort of their genres. From the opening guitar shards of "Thunderstruck," it is clear no such concessions have been made. The bass drum falls in, not so much a timekeeper as an underground detonation device, and the repeated cries of "thunder!" gain volume like an approaching army. The difference being that this is an army with one mission and one mission only: to knock the lights out of anyone within earshot.
The album succeeds not only because the exuberant pounding the band gives to the familiar "Back in Black," "Highway to Hell," "Shoot to Thrill" and "Who Made Who," but also because of the equal pulverizing of older Bon Scott era numbers such as "Sin City" and "High Voltage." Vocalist Brian Johnson, in particular, injects some his best screeches in years.