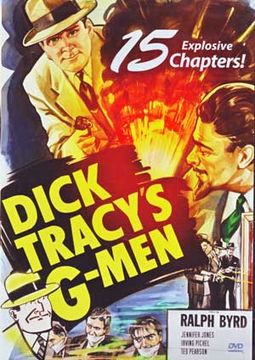 Nicholas Zarnoff, master spy and the most hated man on Earth, is sentenced to die in the gas chamber. By using a secret drug, which does not permit the gas to enter his lungs, Zarnoff cheats death and escapes. Dick Tracy, the government's ace investigator, is assigned the task of tracking down Zarnoff and bringing him to justice. For 15 episodes Dick Tracy and Zarnoff battle it out on land, on sea and in the air. Jennifer Jones, seen at the outset of her distinguished career, plays Gwen, Dick Tracy's loyal secretary.

Tracy and his G-Men fight to stop an international spy from stealing America's secrets. Available as a feature and a serial.