First time on DVD, the true story of vaudeville star Le Petomane and his ability to control his awe-inspiring flatulence. 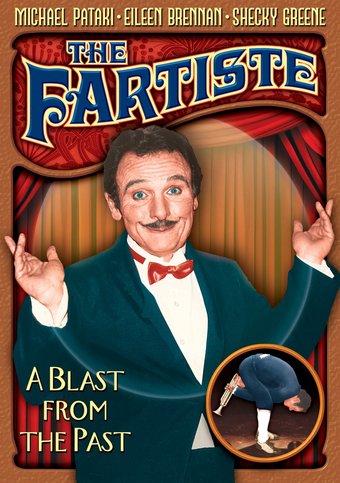 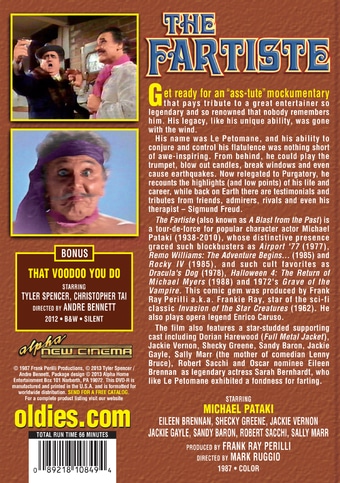 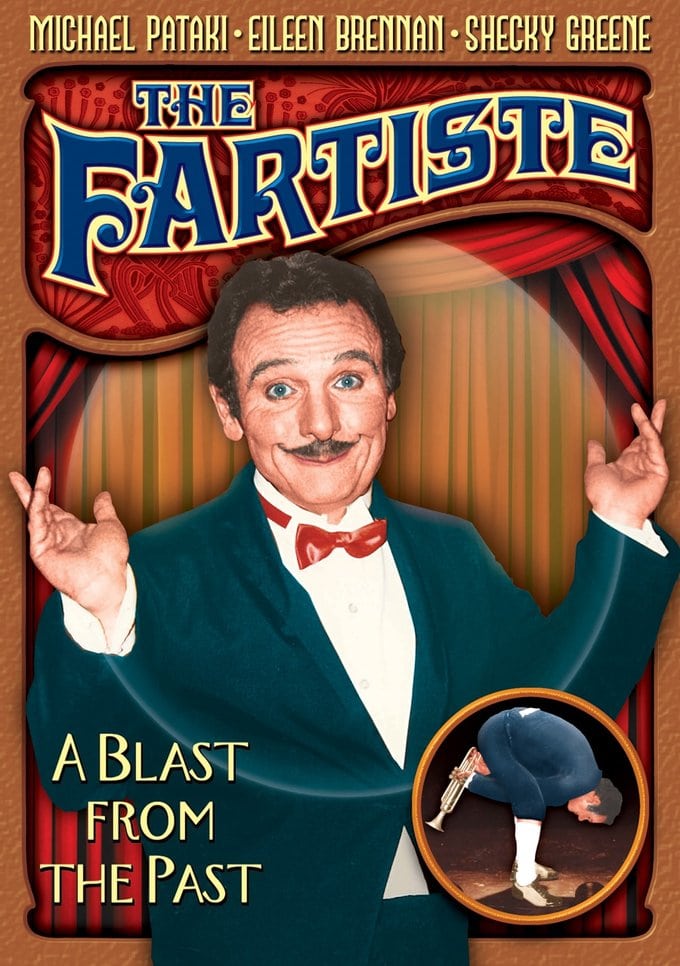 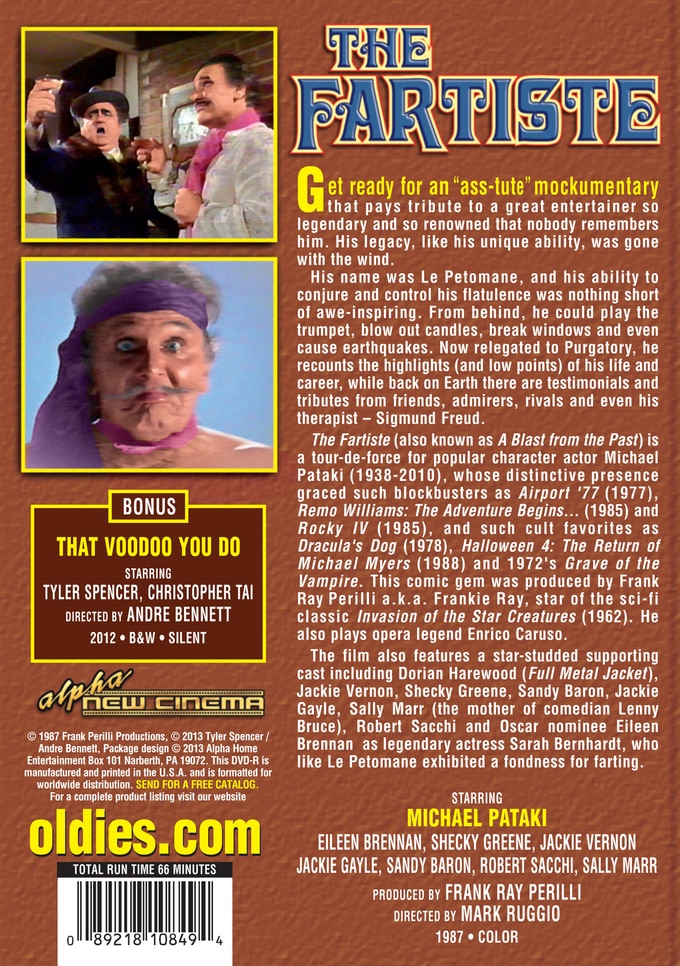 Get ready for an "ass-tute" mockumentary that pays tribute to a great entertainer so legendary and so renowned that nobody remembers him. His legacy, like his unique ability, was gone with the wind.

His name was Le Petomane, and his ability to conjure and control his flatulence was nothing short of awe-inspiring. From behind, he could play the trumpet, blow out candles, break windows and even cause earthquakes. Now relegated to Purgatory, he recounts the highlights (and low points) of his life and career, while back on Earth there are testimonials and tributes from friends, admirers, rivals and even his therapist - Sigmund Freud.

The Fartiste (also known as A Blast from the Past) is a tour-de-force for popular character actor Michael Pataki (1938-2010), whose distinctive presence graced such blockbusters as Airport '77 (1977), Remo Williams: The Adventure Begins... (1985) and Rocky IV (1985), and such cult favorites as Dracula's Dog (1978), Halloween 4: The Return of Michael Myers (1988) and 1972's Grave of the Vampire. His many television appearances include Star Trek, All in the Family, The Twilight Zone and Star Trek: The Next Generation. He also directed the low-budget shocker Mansion of the Doomed (1977).

BONUS: That Voodoo You Do (2012, B&W, Silent) with Tyler Spencer, Christopher Tai and directed by Andre Bennett.


The Fartiste is an unusual little film (well,actually video) about a guy from the vaudeville era who has a rare talent. His flatulence prowess is such that he can move things and even create punctures in solid objects, so lethal is his talented backside.
Strange-yes. Funny--bigger yes. Inexpensive enough that no matter what the opinion, it will be well worth the purchase.


I thought it was exciting and the funniest thing I have seen in years. Too amazing for words. A must see video.


Don't bother trying to analyze this one. Between the silent film clips, the scent-uous plot line and and a smattering of ridiculous characters ("Jaques the Knife" and the Broadway agent, my favorites), this short film is funny on about 10 different levels. Five Star farce...or should I say farts? Oh well, you get the idea.


I recently saw a great obscure movie called ,"The Fartiste", starring Michael Pataki. This film had me laughing time and time again. Yes, it's a low budget affair but that's part of the charm. Filled with favorite character actors you know and love, all having a great time, this film made me smile for over an hour. Imagine Frosty the Snowman talking about farting !!!!!! Based on a true story, this film gives you the highs and lows of the great Le Petomane, the world's most talented gas passer. What a story. A big 5 stars from me. Order this film NOW !!!!


Back in the day when VHS was battling Beta for market dominance I first saw this movie. It was delightfully funny back then. One could not help notice that the cast was having as much fun making the movie as the viewer was watching it. An unusual topic (flatulence taken to high art) combined with an atypical location (purgatory) combine to make great comedy. It is hard to tell if it was all scripted or partially improvised, but, it comes together in one hysterically funny whole.

A friend knew of my proclivity for this film and gave me the gift of this DVD. I was thrilled because, you know what; it is still just as funny now as it was yesterday.


I remember seeing a foregin version of Le Petomane at a Film Fest. several years ago; it was quite boring. So I was somewhat skeptical about viewing anything else about this subject. Well this movie is not only clevery written and very funny, but has a classic cast. And you know the film was ahead of its time just by this extensive cast of actors, who at the time chose to be part of it. Most every character is someone who you will recognize from other films, and just seeing them having fun and enjoying themselves is what make this film so surprisingly funny for a subject that has been beaten to death in films today. No deep message, just an hour of laughs and entertainment! I won't attempt to list my favorite actors and their scenes, as I would definitely exceed the 300 words allowed here.


Michael Pataki's outlandish performance as
"The Fartiste" finally comes to DVD !
I challenge anyone to find a character that goes
as far to make us laugh?! Imagine playing a game of darts, or blowing a trumpet with your posterior !!?? Well, it's possible with "The Fartiste". Laughs are endless and repeated viewing is a must as you'll see different things with every viewing. Perfect for frat parties and other large gatherings with the proper enhancements- even better !