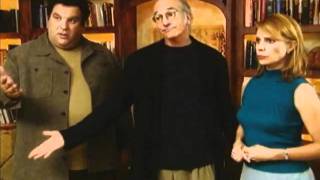 Life continues to befuddle hapless millionaire (and SEINFELD producer) Larry David in this fifth season of shows. As usual, Larry is joined by his faithful, beleaguered wife, Cheryl (Cheryl Hines), and his manager, Jeff (Jeff Garlin), while regular guests such as Ted Danson, Wanda Sykes, and Richard Lewis are on hand to add to the mayhem. The fun begins with Larry wondering whether he's adopted after his father seems to suggest that he might be, leading to a long-standing subplot that runs through the entire season. But as Larry tries to figure out his past, the present throws innumerable curveballs in his direction, with gay rights activists unhappy with him, a sandwich that bears his name not being quite to his taste, and a Seder set up by Cheryl ending in disaster. While season five will present comfortable and familiar viewing for those already familiar with Larry's antics, there are a few surprises in store, especially as the final episode careers towards an unexpected ending.

Curb Your Enthusiasm: The Complete Fifth Season
Money. Security. Famous Friends. Forgiving wife. Devoted agent. Larry David has it all - except, perhaps, his identity. This season, Larry takes a sentimental journey in search of his roots, stepping on a few toes along the way.