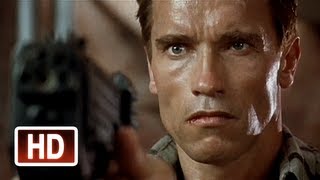 "See you at the party, Richter!"
- Quaid (Arnold Schwarzenegger) after dispatching of Richter (Michael Ironside)

Arnold Schwarzenegger is perfectly cast as Quaid, a 2084 construction worker haunted by dreams of Mars in this crowd-pleasing science fiction spectacle. Against the wishes of his sexy blonde wife (Sharon Stone), Quaid goes to Rekall, a company that implants artificial memories, so he can "remember" visiting the red planet that is now being settled by human inhabitants. However, Quaid is actually an amnesiac secret agent from Mars--or is he' Enemy agents led by a thug named Richter (Michael Ironside) start trying to kill him before Quaid remembers anything more. Bullets and bone-crunching mayhem follow in large doses as Quaid heads to Mars to deal with mutants, ancient alien races, and Cohagen (Ronny Cox), a greedy capitalist controlling the colonists' air supply, in an effort to remember his real identity. TOTAL RECALL is based on the story "We Can Remember It for You Wholesale" by Philip K. Dick and was a big box-office hit, helping to firmly establish director Paul Verhoeven as a specialist in darkly satiric, blood-drenched genre films. His next stop: BASIC INSTINCT, also with Stone.

In 2084, Quaid, a construction worker on Earth is haunted by dreams of another life on Mars. He goes to Rekall Inc. to have artificial memories of Mars planted in his head. However, during this procedure, a number of agents from Mars fear he will discover his mysterious true identity. Paul Verhoeven's film, based on a Philip K. Dick story, is a wild ride with eye-popping special effects.