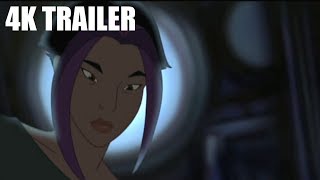 The story is a classic bildungsroman, following the journey of Cale, a young man who holds the destiny of humankind in his hand--literally. Opening with the stunning destruction of earth as seen from space, the film launches the audience into a seamlessly imagined universe in which the alien Drej have turned humans into homeless émigrés, searching desperately for a new world. Cale (voiced by Matt Damon) is haunted by the legacy of his father, who abandoned him but created the spaceship Titan, which holds the key to the new home of humankind. With the plan for Titan imprinted in his hand, Cale is swept from a life of lonely drudgery devoid of female companionship into the colorful crew of mysterious Captain Korso (voiced by Bill Pullman). On the Valkyrie ship, Cale enjoys Korso's crew, including the kind, beautiful, and expert woman pilot Akima (voiced by Drew Barrymore) along with a strange but fascinating band of aliens.

A science-fiction film that combines traditional animation with computer-generated images, TITAN A.E. takes place in the distant future, after earth has been obliterated by a mysterious alien race known as the Drej. Cale (Matt Damon) is a human teenager who has been given a mysterious map by his father, leading him on an unforgettable journey. The map just might help Cale unlock a secret that will save the rest of humankind, on the long-lost spaceship Titan. But will the Drej and their allies get there first' TITAN A.E. is exciting sci-fi fun with amazing animation sequences and a fast-moving rock soundtrack.

Final Fantasy: The Spirits Within
$3.98 on Sale
Add to Cart

Legend of the Guardians: The Owls of Ga'Hoole (DVD)
$6 Super Savings
Add to Cart