The Future isn't big enough for the both of them. 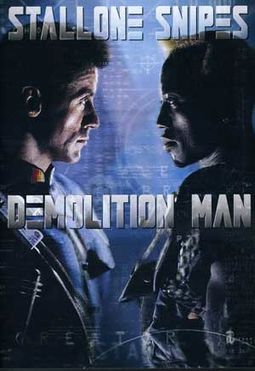 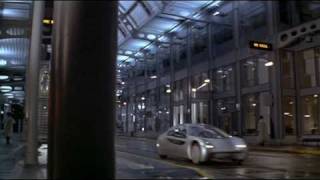 San Angeles, a megalopolis stretching from Santa Barbara to San Diego, is the futuristic utopia of the politically correct. Red meat, salt, sugar, smoking and sex have all been outlawed. This spells h-e-l-l for John Spartan, a 20th century cop revived to chase down a 20th century terrorist on the loose in this sterile paradise.

In the 1990s, urban terrorist Simon Phoenix is imprisoned in ice for the protection of society. His arch-nemesis, police officer John Spartan, also suffers the same fate after Phoenix frames him for the deaths of a busload of innocent bystanders.
In 2032, in the renamed city of San Angeles, Phoenix is accidentally freed and begins a new crime spree on a now violence-free populace. Spartan is released to capture the one-man wrecking crew; in the process, he discovers the corruption beneath San Angeles' pristine surface. Through non-stop jokes and action, Spartan shows the docile, futuristic police force that the old ways are sometimes the best ways.