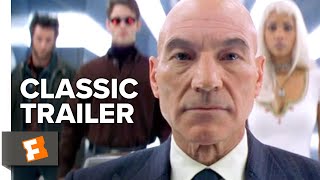 "When they come out...does it hurt'"--Rogue (Anna Paquin), asking Wolverine (Hugh Jackman) about his retractable metal claws
"Every time."
- Wolverine
"Mankind isn't evil, just uninformed."
- Professor Xavier (Patrick Stewart)
"You actually go outside in these things'"--Wolverine to Cyclops (James Marsden) about their uniforms
"Well, what would you prefer' Yellow spandex'"
- Cyclops

Based on the long-running Marvel comic book series, X-MEN takes place in the near future, as certain humans are evolving into mutants with special powers. In the Canadian wilderness, a young runaway mutant named Rogue (Anna Paquin) and Wolverine (Hugh Jackman), a bad-tempered, quick-healing mutant with retractable metal claws, are suddenly attacked by the powerful Magneto (Ian McKellen) and his lackeys. Fortunately, Cyclops (James Marsden) and Storm (Halle Berry), students of the compassionate Professor Charles Xavier (Patrick Stewart), interfere and bring them back to Xavier's School for Gifted Youngsters. Here Wolverine and Rogue learn more about the conflict between Xavier and the militant Magneto, who wants to power a device that will genetically alter humans, with possibly deadly results. Only Xavier's students can stop Magneto's plans.

Director Bryan Singer (THE USUAL SUSPECTS) displays his expertise with an ensemble cast, accomplishing a feat by making the first live-action film about an entire group of superheroes. Hugh Jackman's portrayal of the ill-tempered Wolverine is dead-on, while Patrick Stewart and Ian McKellen are ideally matched in their Martin Luther King, Jr.- and Malcolm X-like roles. Smart and well-paced, X-MEN towers above most comic book movies.

Marvel's classic comic book comes to life in this exciting big-screen adaptation. The story focuses on the efforts of a well-intentioned professor, Charles Xavier (Patrick Stewart). By pulling together a group of superhuman mutants, Professor X hopes to prove to the world that these genetically enhanced beings are not the dangerous, evil villains humanity claims them to be. When Magneto (Ian McKellen), an angry mutant, vows to eradicate human existence, it's up to the X-Men to save the day and keep the world united. Bryan Singer's film is a visual feast, containing a host of standout performances, particularly from newcomer Hugh Jackman as Wolverine. The VHS and DVD releases contain 10 minutes of extra footage.