A 3000 year old mummy and an ageless evil queen terrorize an archaeological expedition. 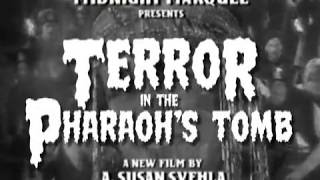 A 3000 year-old mummy arises to terrorize intrepid adventurers Ace Zucco, Mike Flannigan and reporter Fay Kendal, on assignment in the Middle East. The team is searching for Rick Banning, an archeologist who has disappeared without a trace amid reports that he had rediscovered the lost legendary city of Lemuria. The fearless trio follow Banning's trail from London to Scotland and finally Egypt. Their quest leads them to the fabled lost city where evil Queen Amanetor has prepared a deadly welcome.

Here's what people are saying about Terror In The Pharaoh's Tomb:

"Svehla has transformed the process of digital-collage filmmaking into an exercise in imagination! Featuring the creepiest mummy since 1957's Pharaoh's Curse." - Michael H. Price (Ft. Worth Business Press, Forgotten Horrors)

Suspense | Thriller
This product is made-on-demand by the manufacturer using DVD-R recordable media. Almost all DVD players can play DVD-Rs (except for some older models made before 2000) - please consult your owner's manual for formats compatible with your player. These DVD-Rs may not play on all computers or DVD player/recorders. To address this, the manufacturer recommends viewing this product on a DVD player that does not have recording capability.

Customer Rating:
Based on 55 ratings.


Fans of classic horror films will enjoy every moment of Terror in the Pharaoh's Tomb! Jam-packed with campy thrills and laughs, Pharaoh's Tomb recalls the great heyday of Universal monster movies, bringing shining new talents and legendary film stars together for a globe-trotting tale of immortal terror. When archeologist Rick Banning vanishes, it is rumored that he has discovered the lost Egyptian city of Lemuria. Three intrepid adventurers set out to find Banning, but find themselves caught in the clutches of an evil Egyptian queen and her minions, including a marauding mummy! Popular Scream Queen Leanna Chamish plays the wicked Queen Amanetor with stylish maliciousness, and it is a joy to watch her wicked amusement as she toys with her captive male prey. The rest of the cast, including the great George Stover, are a delight, as is the addition of matinee idols of yesteryear, including Bela Legosi, Lon Chaney, Jr. and Peter Lorre. Dead End Kids fans will be thrilled to see tough guy Leo Gorcey once again. With the use of clever CGI, Terror in the Pharaoh's Tomb takes the viewer back to the days of classic horror films and is destined itself to become a classic Sunday afternoon popcorn favorite.


My son Rob Long dies early in this movie, though he played 2 background characters later. He made me laugh and was more enterprising than the lead character because of his movie mugging and the execution of his lines. He was joyous in finding the treasure as only a criminal could be.

The movie brings older movie lines out of the woodwork.
Leanna Chamish snarls in great, throaty, villain style.
The chief "loves" his job.
The woman reporter is hilariously good.

The use of public domain B&W footage, green screening, and modern Apple techniques is often startlingly good--despite "Some" screen problems with the fire in the torches.

The Lemuria storyline works. George Stover and the PI, the floozie, all good character actors.

All in all, a very fun film. Worth telling others.

The director and producer have a nice product on their hands.


An affectionate tribute to the horror films of a bygone era with public domain footage of famous stars from the past intercut with new scenes featuring a talented crop of Baltimore actors.