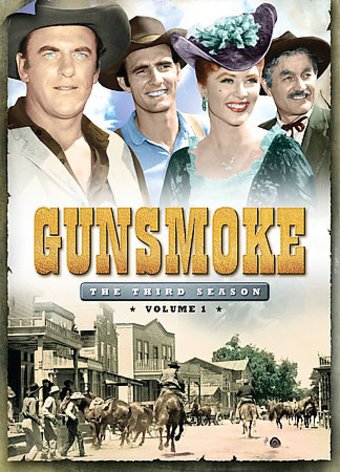 James Arness vaulted into the annals of television history with his iconic portrayal of U.S. Marshal Matt Dillon in the long-running television Western GUNSMOKE. Armed with a quick draw and an even quicker wit, the principled and intelligent Marshal Dillon brought peace and righteousness to the lawless frontier of 1800s Dodge City with the help of his trusted deputy, Chester Goode (Dennis Weaver), his friend Doc Adams (Milburn Stone), and saloon keeper Miss Kitty (Amanda Blake). This collection presents the first volume of the series' third season.

Marshal Matt Dillon (James Arness) is in charge of Dodge City, a town in the Wild West where people often have no respect for the law.
Source - Paramount Home Entertainment


Good strong B&W film,very good sound,no interruptions.Good stories.I remember some of the stories from when I was a teen.Keep going with the series. Fred from Austin.