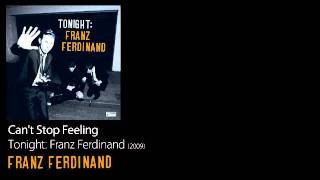 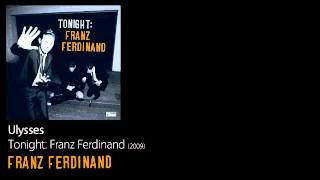 Rolling Stone - p.66
3.5 stars out of 5 -- "Franz Ferdinand mainly stick to their small, intensely flavorful basics, packing songs with tempo changes and propulsive guitar riffs."
Spin - p.85
3.5 stars out of 5 -- "TONIGHT is Franz's boldest attempt at a full-on disco record....TONIGHT is all about the art of the extended flirt."
Entertainment Weekly - p.96
"The mix of Alex Kapranos' louche croon with the band's disciplined racket is still a knockout..." -- Grade: B+
Uncut
3 stars out of 5 -- "[L]ead-off single 'Ulysses,' is actually rather terrific, its louche shuffling beat complemented by vampiric snarls and a particularly devilish Kapranos vocal..."
Alternative Press - p.99
3 stars out of 5 -- "The closing 'Katherine Kiss Me' is a plaintive acoustic companion to 'No You Girls,' that's cut from the same heart-on sleeve cloth as SO MUCH BETTER's 'Fade Together.'"
Billboard (p.33) - "[T]he album offers plenty of adrenaline, pheromones and stealthy sophistication, thanks to Bob Hardy's driving bass, Alex Kapranos' expressive crooning and the band's unusual ability to make every song sound like a single."
Mojo (Publisher) - p.102
4 stars out of 5 -- "Opening track 'Ulysses' makes it intentions clear from the start....[It's] a song about the universal quest for pleasure and escape, a raucous incitement to join them that's hard to resist."
Blender (Magazine) - p.61
4 stars out of 5 -- "The whole album is paced as a soundtrack to a night on the town, starting with the anticipatory come-on of 'Ulysses'...and peaking with 'Lucid Dreams,' eight dazed minutes of electro pop that lurches off the dance floor and bangs into the nearest wall."
Record Collector (magazine) - p.93
3 stars out of 5 -- "[W]hat you get remains intrinsically FF: taut and dance-infused, yet still rock....Alex Kapranos' voice is vital."
Clash (Magazine) (p.92) - "The album's centerpiece is 'Lucid Dreams' -- possibly the most stunning and ambitious recording Franz have put their name to....Refining and transcending their familiar pop formula, TONIGHT: FRANZ FERDINAND is their most complete work to date."

It's easy to tag TONIGHT: FRANZ FERDINAND, the Scottish alt-rock act's third full-length outing, as its dance-punk departure. Adorned with careening keyboards, punchy beats, and tight rhythms clearly geared towards the club (see the slinky opener, "Ulysses"), the album allows frontman Alex Kapranos to play up his winking-cad persona amidst the slick electro-pop environs of producer Dan Carey (CSS, Hot Chip). While such techno tweaking didn't necessarily suit FF's contemporaries Bloc Party, it fits the Glasgow crew quite nicely. After all, the ensemble's breakthrough hit, "Take Me Out," verged on disco, and subsequent singles didn't fall far from the dance tree either. Those worried that Franz Ferdinand have forgotten about the "rock" in their stylistic equation can rest assured that angular guitar lines still abound, particularly on the funky "No You Girls"--they've just ceded some space in the busier, often more engaging, arrangements of TONIGHT.