All The Uproarious Fun Of the Smash Broadway Play! 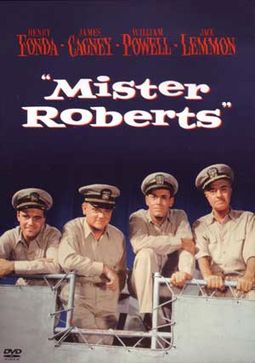 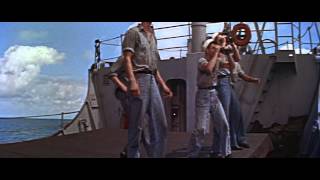 The film represents Henry Fonda's return to the screen after an absence of seven years, part of which was spent playing the eponymous officer in the immensely successful stage version of Thomas Heggen's novel. As cargo officer and second in command on a supply ship during World War II, the easygoing Lt. Doug Roberts is excluded from a much desired combat role while playing whipping boy to dyspeptic tyrant Captain Morion (James Cagney). Ensign Frank Pulver (Jack Lemmon), a brash yet cowardly wheeler-dealer, entertains Roberts with his elaborate pranks while the fatherly Doc (William Powell in his last screen appearance) offers advice. The young crew tries every available means of killing boredom, including eyeballing the nurses on a nearby island through a telescope, and Roberts does what he can to get them the R and R they badly need. The film had a troubled production history, mostly because of conflicts between Fonda, a friend of author Thomas Heggen's, and Ford, who wished to make changes that Fonda disliked. Shortly after physically attacking Fonda, Ford suffered a ruptured gallbladder and was replaced by Mervyn LeRoy. Fonda is excellent, and Lemmon gives an inspired, Oscar-winning performance in a film that flows evenly from the comic to the tragic and stands among the best World War II films produced in the 1950s.

The crew of a World War II cargo ship comes to rely on the genial Mister Roberts to mediate the tantrums of an unqualified captain.