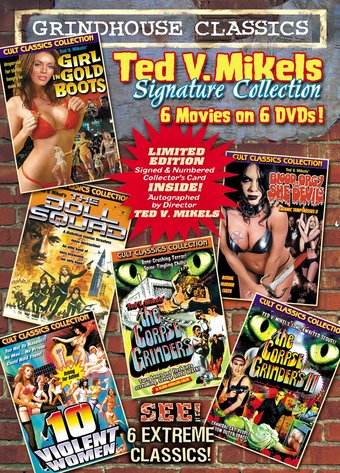 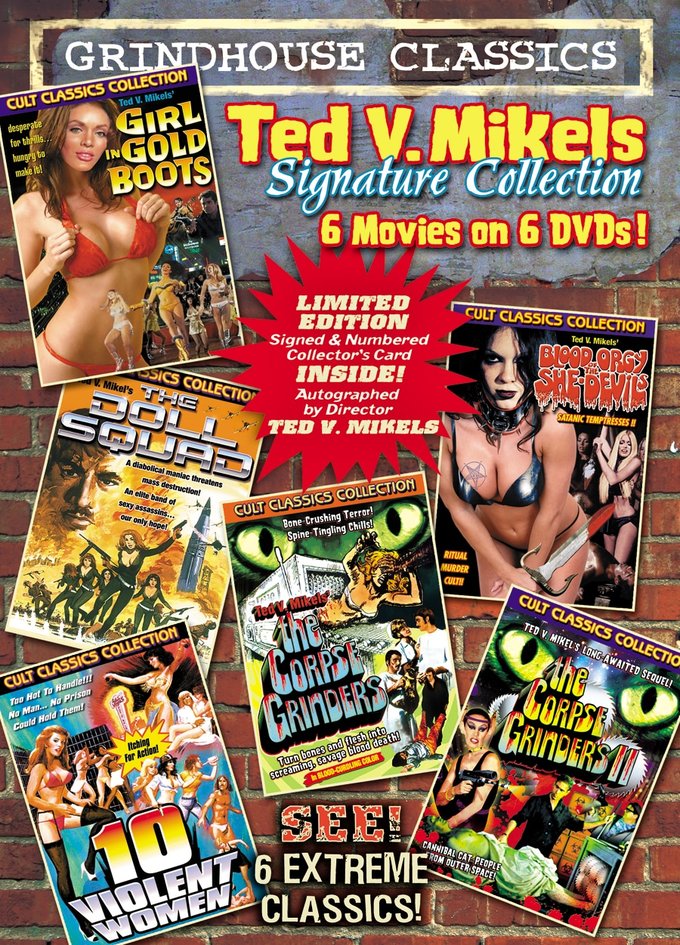 10 Violent Women: Driven to fury by their slimy, abusive boss, a group of foxy female gold miners ditch their picks and go for the gold the easy way - by stealing it! They snatch a million dollars in gems from a jewelry store, then pay a quick visit to Leo the Fence (played with macho brio by flamboyant director, Ted V. Mikels). When Leo tries to give them bags of heroin instead of cash for their booty, they drive a spiked heel into his heart and ride off with the jewels AND the drugs. Desperate to unload their contraband, they deal the dope to undercover narcs and get busted. Sent to prison, they fall under the sadistic thumb of a female warden with a taste for leather whips and submissive girls. After a few weeks of this depraved debasement, the girls plot their escape! Cat fights and cold showers give the hardcore crew of 10 Violent Women plenty of chances to show off their "talents."

The Corpse Grinders: Human bodies are fed into a bone crunching meat grinder, mashed into a bloody pulp, poured into cans and shipped out to market as Lotus Cat Food. Unsuspecting pet owners are being attacked and killed by felines driven into blood lust by their newly acquired taste for human flesh. The corpse-grinding cat food moguls have been running low on dead bodies and are on the lookout for fresh meat. Enter Angie, a nubile young nurse whose cat is acting up after eating out of Lotus cans. Angie comes to the factory looking for answers and is abruptly taken to the blood-soaked conveyor belt that feeds the insatiable grinder. A low budget shocker in the vein of Blood Feast (1963), The Corpse Grinders (1971) has become a perennial cult favorite. Eccentric producer, director, writer and editor, Ted V. Mikels, would revisit the bloody cat food cannery in his long-awaited sequel, The Corpse Grinders II (2000).

The Corpse Grinders II: The giant flesh-mangling meat grinder in the basement of the Lotus Cat Food Company is back in business under new management. And this time, the popular "food for cats who like people" has drawn the attention of an alien race of intelligent felines from the planet Ceta. The Cetans' food supply has been destroyed in their interplanetary war with dog-headed dinosaurs. With help from the U.S. Government's "men in black," the cat queen, Felina, negotiates a mega-deal with the Lotus Company to supply her planet with food. This sudden increase in orders has the new owners scrambling for fresh - and not-so-fresh - human flesh to meet the growing demand. A campy low-budget sequel to 1971's cult classic gore-fest, The Corpse Grinders, with an interplanetary sub-plot grafted on, this frightfully funny film features a cameo appearance by its producer and director, Ted V. Mikels as a hitch-hiking spacefarer who wants to join Felina on a voyage back to Ceta.

Bonus features include a commentary track by Ted V. Mikels and "Making of Corpse Grinders II" with Shanti.

The Doll Squad: An elite team of beautiful special agents with license to kill - and kill again! A diabolical madman threatens the world with a deadly plague virus!

Eamon O'Reilly and his private army of mercenaries have already destroyed a manned American spacecraft during lift-off, just to show they mean business. But what chance does O'Reilly's army have against a highly trained and beautifully tanned team of brainy and brutal babes with machine guns?

Girl in Gold Boots: A gorgeous but gullible small-town girl grabs for dancing glory in the bright lights of glamorous Hollywood. Lured from her dead-end life by Buzz, a petty hood with a hot car, a gun, and a sister in the "business," pretty young Michele jumps at the chance to live out her dreams of stardom. As the pair ride to L.A., they're joined by a hitchhiking drifter who calls himself Critter. A tense love triangle develops that threatens to unleash the violent passions smoldering just beneath their hip, care-free facade. The seedy side of show biz draws the trio into a dangerous labyrinth of drugs, thugs and tripped-out junkies, where the only dreams that come true are nightmares. Girl In Gold Boots is a glitzy, Sixties drama from one of Hollywood's leading producers of exploitation cinema, Ted V. Mikels. With a cast of unknowns, a handful of original rock songs performed at Hollywood's Haunted House club, and a bevy of bikini-clad go-go dancers, this movie proves that a gold bikini and a killer body can make you a star.


Not does only does this set contain a good number of Ted's film, it also includes an autographed card. A must have for any fan of Ted V. Mikels.


If you know who Ted V. Mikels is, you pretty much know whether you want this set or not. It's the definitive collection of Mikels' major films. All it's missing is Astro Zombies.

It really does come with a photo-card with Mikels' signature (something to treasure, if you're like me). And it is numbered.

One disappointing aspect is that instead of coming in a real box, these DVDs are held together by a flimsy paper sleeve. That, and the missing Astro Zombies, makes this set drop to 4 stars for me; but it's still a must for the fan of Mikels and 60s exploitation cinema in general.