Jeff Lynne Alone in the Universe

NME (Magazine): "The record is awash with the swoops of strings and crisp drum clips that he's made ubiquitous on albums by everyone from George Harrison to Roy Orbison..." 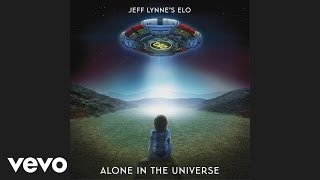 Jeff Lynne's ELO - When I Was A Boy (Audio) (Music Video) 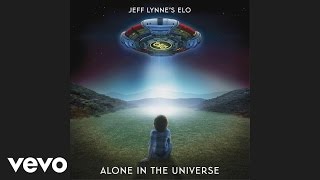 Rolling Stone
"In contrast to ELO's early prog-rock sprawl, ALONE is bracingly succinct both in words and music."
NME (Magazine)
"The record is awash with the swoops of strings and crisp drum clips that he's made ubiquitous on albums by everyone from George Harrison to Roy Orbison..."

Personnel: Jeff Lynne's ELO (guitar, piano, keyboards, vibraphone, drums, background vocals); Steve Jay (shaker, tambourine).
Audio Mixers: Steve Jay ; Jeff Lynne's ELO.
Recording information: Bungalow Palace Studio, Los Angeles, CA.
Illustrator: Ryan Corey.
Photographer: Rob Shanahan.
Alone in the Universe isn't the first Jeff Lynne album of the 21st century, nor is it the first Electric Light Orchestra of the 21st century. That honor belongs to Zoom, a 2001 comeback that faded quickly into history books, its lack of success blamed in some quarters on Lynne's reluctance to tour. If Jeff didn't want to hit the road, his old bandmate Bev Bevan had no problem constituting a lineup and touring under the name ELO Part II, whose presence somewhat explains why Alone in the Universe is credited to the somewhat convoluted Jeff Lynne's ELO -- a truncation of the band's full name that also assigns credit where it's due, as most listeners associate this majestic post-Abbey Road pop with Lynne alone. Certainly, Alone in the Universe is recognizably the work of Lynne: harmonies so sweet they'd induce cavities, stately midtempo marches that just avoid the appearance of pomp, a devotion to both McCartney-esque melody and Martin-esque production, spiked by an ode to George Harrison's slide guitar. At 32 minutes, Alone in the Universe is remarkably devoid of excess -- notably, it's just five minutes longer than his breezy 2012 covers album Long Wave -- but it doesn't feel shrugged off, nor does it feel especially attached to its time. Lynne abandons some of the clean-cut sharp edges of his early-'90s productions so he can happily live in the late '70s -- there are echoes of disco on "One Step at a Time" and the entire enterprise carries a sci-fi aura, even if it never is fantastical or prog -- and there's an appeal to his long looks back because he's not pandering to nostalgia: he's simply embracing who he is. If he hasn't written a knockout single -- a high bar for a craftsman of 67 to clear -- he's nevertheless sculpted ten strong songs, each one containing a sturdy melodic foundation and dressed in the handsomest threads of 1978. For many longtime followers of Lynne and ELO, that will be all they need from Alone in the Universe. ~ Stephen Thomas Erlewine