Fantastic monsters and special effects highlight the nightmarish tale of man's descent into purgatory to rescue his wife from a hellish demon. 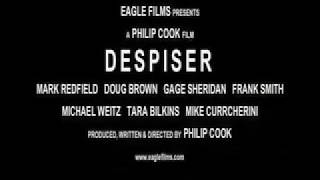 Life couldn't possibly be worse for Gordon (Mark Redfield) after he is fired, loses his house and gets dumped by his wife - until he wrecks his car and finds himself in an otherworldly purgatory. Once there, he is attacked by fanatic Shadowmen who lead an army of tortured souls known as the Ragmen. Gordon is rescued by a daring and motley band of freedom fighters - a handful of warriors from different periods in history who had lost their lives in noble sacrifice. Gordon joins the fearless group on a wild adventure through surreal, nightmarish landscapes. They must defeat the Despiser, a monstrous evil being who reigns supreme in this God-abandoned world that exists someplace north of Hell and south of Heaven. Fighting to redeem their souls, the warriors' quest leads them to a forbidding fortress where their fates will be decided.

This original and imaginative work of adventure, horror and fantasy from writer/director Philip Cook features explosive action, extraordinary effects and a macabre vision of an apocalyptic afterlife.

When Gordon (Mark Redfield) dies after wrecking his car in a horrible accident, he wakes up in a very surreal purgatory. Once there, he is attacked by a band of tortured souls and is rescued by a noble crew of freedom fighters. Together they move on to begin a battle to the finish against an evil ruler called the DESPISER. The goal: to get to heaven as fast and safe as possible.

Science-Fiction | Supernatural
This product is made-on-demand by the manufacturer using DVD-R recordable media. Almost all DVD players can play DVD-Rs (except for some older models made before 2000) - please consult your owner's manual for formats compatible with your player. These DVD-Rs may not play on all computers or DVD player/recorders. To address this, the manufacturer recommends viewing this product on a DVD player that does not have recording capability.

The Chronicles of Narnia: The Lion, The Witch, and the...
$8.40 Super Savings
Add to Cart

Customer Rating:
Based on 561 ratings.

Actually enjoyed this Movie Lover: sawMallBfoyomommawuzborn from LOS ANGELES, CA US -- May, 25, 2006

I'll prob'ly watch this again a coupla times. Often looks good, sorta gamey--but that fits with the suggested cross-plane reality bending. Pointless gunfights and car chases balanced with pointed plot. Kinda different and surprisingly likable. Certainly worth 5 bucks (to anyone with more than 50).

It's kinda like a school project that turned out much better than expected--apparently, even by it's cast and creator(s)(judging from the interviews and commentary in the "Special Features").

93%off
The Who / Various Artists
The Who and Friends In Concert - TCT: Concert For Teenage... TOP 10 Bestseller
99¢ on Sale
Add to Cart
(2)
Film Collectors & Archivists: Alpha Video is actively looking for rare and unusual pre-1943 motion pictures, in good condition, from Monogram, PRC, Tiffany, Chesterfield, and other independent studios for release on DVD. We are also interested in TV shows from the early 1950s. Share your passion for films with a large audience. Let us know what you have.
How to Order
Shipping Rates & Options
Holiday Ordering Guidelines
International Shipping
Return Policy
Request a FREE Catalog
Order Items by Catalog
View Catalogs Online
Safe Shopping Guarantee
Buy a Gift Certificate
About OLDIES.com
Customer Reviews
Contact Info
Privacy Policy
Send Feedback
Login
Forgot Password?
Sign Out
Email Subscriptions
Redeem Gift Certificate
To place an order or for customer service, call toll-free 1-800-336-4627 or outside the United States, call 1-610-649-7565
Open Monday-Friday: 9am-10pm, Weekends: 11am-7pm (Eastern Time)
Se habla Español! Spanish-speaking representatives available, Monday-Friday: 9am-5pm (Eastern Time)
Portions of this page © 2021 TiVo Corporation. For personal non-commercial use only. All rights reserved.
All copyrights, trademarks, and logos are owned by their respective owners. Rotten Tomatoes content and Certified Fresh™ Logo is Copyright © Fandango. All rights reserved.
© 2021 OLDIES.com and its affiliates and partner companies. All rights reserved.