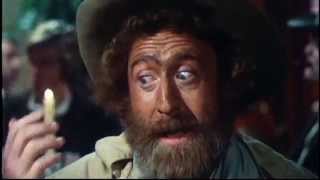 In Robert Aldrich's hysterical comedic Western THE FRISCO KID, a sweetly innocent Polish rabbi, Avram Belinsky (Gene Wilder), travels through 1850s America toward his new congregation and wife in San Francisco. Along the way, he forms an uneasy alliance with an inept bank robber, Tommy (Harrison Ford). As Avram teaches Tommy about the Torah, Tommy instructs Avram on how to handle a gun, and the two cut a meandering, pratfall-filled path across the wild West, encountering Indians, settlers, and merciless outlaws. Aldrich (TOO LATE THE HERO, WHAT EVER HAPPENED TO BABY JANE'), a master of the penetrating psychodrama, the rousing war saga, and the icy, violent noir, here slips the standard Western concoction a dizzying, hilarious mickey of slapstick humor with his two feckless protagonists, played with gusto and perfect timing by Wilder and Ford.

Frisco Kid, The
It's 1850 and new rabbi Avram Belinski sets out from Philadelphia toward San Francisco. Cowpoke bandit Tom Lillard hasn't seen a rabbi before. But he knows when one needs a heap of help. And getting this tenderfoot to Frisco in one piece will cause a heap of trouble - with the law, Native Americans and a bunch of killers.
Gene Wilder and Harrison Ford are one feisty team as rabbi and rescuer in this rough-'n'-ready romp that rivals Wilder's earlier Blazing Saddles in Wild West hilarity. Director Robert Aldrich is a seasoned hand at blending roughhouse and laughter, as fans of his earlier The Dirty Dozen and The Longest Yard will attest. With a full posse of screen talents, The Frisco Kid rides tall in the comedy saddle.
Director: Robert Aldrich
Starring: Gene Wilder, Harrison Ford, Ramon Bieri

19%off
Support Your Local Sheriff
$16.20 Super Savings
Add to Cart