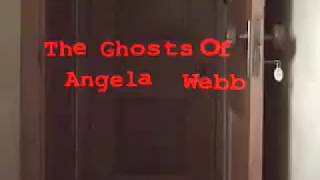 Based on a real-life investigative report, The Ghosts Of Angela Webb is sure to captivate fans of "Unsolved Mysteries" and those with a taste for sensuous supernatural eroticism. This shocking independent film from Karl Petry (director of The Ironbound Vampire) will have viewers discussing the story's many twists and surprises well after the credits have rolled. Contains nudity.

Angela Webb (Deana Enoches, IRONBOUND VAMPIRE) is tormented nightly by the erotic advances of buxom ladies of the night--only these femme fatales are truly fatal, and not even alive themselves! Based on the true claims of a real-life Angela, whose old New Jersey farmhouse was the subject of a 2001 investigation, the story unfolds as the desperate young woman enlists the aid of two accomplices to help rid her house of ghosts. Bernadette Fieldstone is an investigator who works with the help of a psychic, Alexander Stewart, both of whom travel from New York to look into the haunting. Meanwhile, Angela herself learns of the house's violent history, and visits its previous owner in an asylum. A party at Angela's home one night devolves into a paranormal disaster, and events spin out of control, moving toward a fiery conclusion.

On the Waterfront
$19
Add to Cart

Customer Rating:
Based on 87 ratings.


Supposedly based on a true story about a young woman haunted by three ghosts (one of whom is very sexy). The movie is presented like a documentary with a psychic investigating “The Ghosts of Angela Webb.” The video quality is excellent and has a live look to it (like a daytime TV soap opera); it’s not the customary film look. There is female nudity and, despite a bit of overacting on the part of the girl playing Angela, the film is well paced and good.


Reading the previous review, I'm a little sorry that the homicidal (or suicidal) farmer didn't find more to do in the movie. Then again, if one player was going to go naked, I'm happy it was Debbie D and not him. (The young naked woman who slits her wrists in a bathtub at the beginning of the film is also nice to look at. Or is that Debbie D as well?)

Plot is not much (any thrills would come to anyone silly enough to believe IT'S ALL TRUE!), and the acting is considerably below high school play level, but Debbie D sure owns the screen whenever she's haunting about in and out of her see-thru nightgown.

I didn't understand why Angela whined about the spooks. She sure didn't seem to complain when the Debbie D character came down on her at night.

The big surprise ending is telegraphed pretty loudly once Angela tells you where she works....


Angela Webb (Deana Demko) lives alone, but she's not alone - her farmhouse is haunted. Her "roommates" include a homicidal farmer (Duke "Pitbull" Snyder), a teenage boy, and the town harlot (Debbie D), just to name a few. At her wits' end, she recruits the assistance of two psychics (June Marlowe & Michael R. Thomas) in ridding her house of spirits.

It's a good film, albeit a bit short (approximately 40 minutes). I happened to see the film long before its commercial release on video (Duke is my dad, and I'm friendly with director Karl Petry and most of the cast), and really thought it quite good. However, the few scenes containing nudity and adult situations I thought were quite unnecessary and could have been excluded from the film without detracting from the plot (the only thing keeping this film from a five-star review). At the sticker price given, it's well worth the money - and costs less than the average movie ticket!