Strawbs Bursting at the Seams 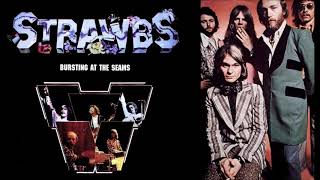 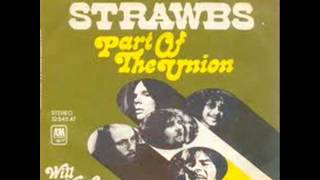 Originally known as the Strawberry Hill Boys, the Strawbs, by the early 1970s were a complex and varied band. They developed from their acoustic folk base to a seamless fusion of melodic rock and ancient and modern folk with classical overtones. From 1973, BURSTING AT THE SEAMS is one of their most well-regarded albums in their catalog, featuring "Lay Down" and "Part of the Union"--hits in the U.K., FM radio favorites in the U.S. This 1998 remastered reissue has three extra tracks not on previous editions. Includes liner notes by John Tobler.
German edition.
CD contains 3 bonus tracks.
Personnel: Dave Cousins (vocals, guitar); John Ford (vocals); Blue Weaver (keyboards); Richard Hudson (drums, percussion).
Liner Note Author: John Tobler.
Photographer: Fin Costello.
The 1998 remastering of the Strawbs' best album (A&M 540-936-2 is the new catalog number) sports the finest sound of any of their CDs, which, by itself, would make this purchase worthwhile -- the detailed notes and the presence of three bonus tracks -- the shorter, punchier single version of "Lay Down," "Will Ye Go," and "Backside" -- only add to the enticements offered. Additionally, the song order has been changed to the correct one (on the LP, "The River" had to follow "Down by the Sea" to end the first side, because of its heavy bass part), but the main virtue is the sound, which is extraordinary: every instrument sounds as though it's miked directly into your speakers. The result is that Dave Lambert's heavy chording is so close that the record does come off closer in texture to a Who album at certain points than it does to the group's folk roots. But the kettle drums at the end of "Down by the Sea" also sound close, and you can practically hear the bowing on the strings. The bonus tracks are a treat -- "Backside," a B-side "credited" to "Ciggy Barlust and the Whales from Venus" (which would have been Tits from Venus if not for the censors) that's a pretty fair burlesque of "Space Oddity," et al., and "Will Ye Go" is a version of "Wild Mountain Thyme" that is equal parts Cousins' voice, acoustic harmonium, and heavy power chords and bass. In all, in this version, Bursting at the Seams is the greatest Strawbs album of all, and the most overpowering. ~ Bruce Eder

Leonard Cohen
Thanks For The Dance
$12.10 CD Sale
Add to Cart

Strawbs
From the Witchwood
$12.10 CD Sale
Add to Cart

25%off
Strawbs
Witchwood: The Very Best Of Strawbs
$8.98 CD Sale
Add to Cart