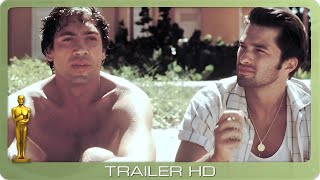 The life of Reinaldo Arenas, an exiled Cuban homosexual writer, is chronicled in an adaptation of his memoir BEFORE NIGHT FALLS, directed by Julian Schnabel (BASQUIAT). Javier Bardem (in an Oscar-nominated performance) portrays Arenas as he journeys from poverty to university to the sexual revolution and homosexual subculture in Havana to persecution and imprisonment under the policies of Fidel Castro for being both gay and a writer. Despite the harsh conditions of prison, the courageous Arenas continued not only to write but also to publish his works abroad. Ultimately, he was allowed to leave Cuba for America, but there he faced new struggles as a man without a country battling AIDS. Schnabel's beautifully filmed sophomore directorial effort captures the essence of Cuba during the revolution. Johnny Depp is featured in the dual supporting roles of the cross-dressing prison inmate, Bon Bon, and the brutal officer, Lieutenant Victor. A well-disguised Sean Penn appears as Cuco Sanchez. Olivier Martinez as Lázaro Gómez Carillo and Andrea Di Stefano as Pepe Malas deliver standout performances. The film received accolades at the 2000 Venice and Toronto Film Festivals.