Kearny, NJ-based cult director Karl Petry presents a film about the ghost of a World War I veteran who returns as a vampire to stalk the streets of modern day Newark. "A true gem." -- Alternative Cinema Magazine 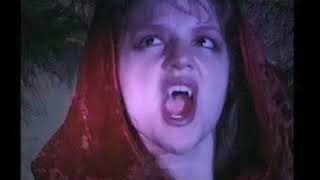 "Moody and gothic... one of the best independents to come along in a long while." -- Scary Monsters Magazine

"A winner in the strange world of low-budget filmmaking." -- Ultra Filmfax Magazine

A former police officer uncovers a pattern of strange disappearances and unsolved deaths in and around the Ironbound section of Newark, New Jersey. The crimes all seem to involve a mysterious man named Thomas whose background is shrouded in the occult.

Thomas, a soldier during World War I, had been shot in battle and was close to death when he was carried away in the arms of a cloaked stranger. The stranger gives him a new "life" as one of the undead. Upon Thomas' return to America, a bloody plague of death begins to spread. The elusive Thomas and his naked vampire brides cannot be stopped from torturing the innocent townsfolk. A beautiful female vampire-killer is out to destroy the blood-sucked and his cult as the list of victims continues to grow.

The Ironbound Vampire is an ambitious underground production that has the feel of a modern-day Edward D. Wood, Jr. movies, and features special guest appearances by Wood cast veterans Dolores Fuller (Glen or Glenda?) and Conrad Brooks (Plan 9 From Outer Space). Contains nudity.

A dying WWI soldier turned vampire leads a secluded life in the shadows of a Newark suburb, killing only as he must and guiltily indulging his sinful sexual appetites. But an investigative writer traces him to his abode and threatens to reveal his horrific secret.

25%off
Forbidden Cinema Presents: Vintage Smokers From the 1920s... TOP 25 Bestselling DVD
$5.95 on Sale
Add to Cart
(4)
Film Collectors & Archivists: Alpha Video is actively looking for rare and unusual pre-1943 motion pictures, in good condition, from Monogram, PRC, Tiffany, Chesterfield, and other independent studios for release on DVD. We are also interested in TV shows from the early 1950s. Share your passion for films with a large audience. Let us know what you have.
How to Order
Shipping Rates & Options
International Shipping
Return Policy
Request a FREE Catalog
Order Items by Catalog
View Catalogs Online
Safe Shopping Guarantee
Buy a Gift Certificate
About OLDIES.com
Customer Reviews
Contact Info
Privacy Policy
Send Feedback
Login
Forgot Password?
Sign Out
Email Subscriptions
Redeem Gift Certificate
To place an order or for customer service, call toll-free 1-800-336-4627 or outside the United States, call 1-610-649-7565
Open Monday-Friday: 9am-10pm, Weekends: 11am-7pm (Eastern Time)
Portions of this page © 2020 TiVo Corporation. For personal non-commercial use only. All rights reserved.
© 2020 OLDIES.com and its affiliates and partner companies. All rights reserved.