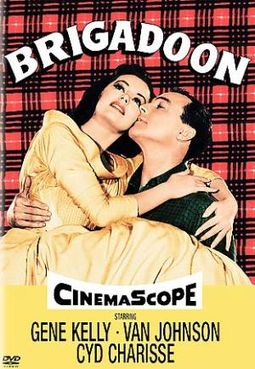 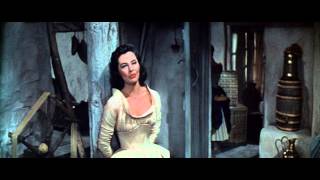 Romance blooms for an American who stumbles upon a magical Scottish village visible for one day every hundred years. Bagpipes and brogues abound in the Technicolor Highlands, and the Lerner and Loewe score makes this one of the most underrated of the grand 1950s musicals.

Gene Kelly, Van Johnson, and Cyd Charisse recapture the charm and beauty of the 18th-Century Scottish Highlands in this enchanting fantasy of music, dance and romance.

The highland village of Brigadoon normally remains invisible, sleeping in the Scottish mists. But one day in every one hundred years, the town magically materializes. And when that day of joyful celebration ends, Brigadoon vanishes from the countryside and returns to its slumber. There's only one catch: no native can leave the village or it will disappear forever.
A pair of American hunters stumble upon Brigadoon on the single day it's come to life, and when one of them falls for a lovely lass, he is tempted to take refuge there. But then a jealous villager attempts to escape, endangering the entire town... and destroying the wonder that was Brigadoon.