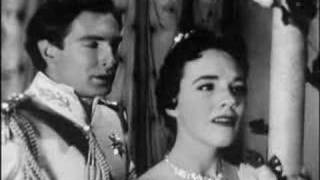 In 1957, CBS-TV aired a magical version of the Cinderella story, produced by the legendary musical production team of Richard Rodgers and Oscar Hammerstein II. Known for such hits as THE KING AND I, THE SOUND OF MUSIC, CAROUSEL, SOUTH PACIFIC, STATE FAIR and OKLAHOMA!, Rodger and Hammerstein infused this old classic with new energy, filling the production with gorgeous ballads, waltzes and comedy sections. RODGERS & HAMMERSTEIN'S CINDERELLA starred legendary Academy-Award winning Julie Andrews as Cinderella, and was initially viewed by more than 115 million people. While this version has been re-made for television and theatre productions on several occasions, this release features the original production, available for the first time since its airing in 1957! Songs include: "Impossible," "Do I Love You (Because You're Beautiful)," and "In My Own Little Corner."

In this enchanting musical delight from the legendary team of Richard Rodgers and Oscar Hammerstein II, beautiful young Cinderella (Julie Andrews) finds her life of drudgery at the hands of her stepmother and two wicked sisters changed forever in one evening, thanks to a fairy godmother and a handsome prince. Lost for years, this first television production of this enduring classic remains a rollicking, tune-filled delight for young and old alike! One of the most beloved entertainers of all time, Academy Award«-winner Julie Andrews (Mary Poppins, The Sound of Music) appeared in theaters this year in the smash hits Shrek 2 and The Princess Diaries 2. The much-revered musical team of Rodgers & Hammerstein produced such family favorites as The King and I, The Sound of Music, Carousel, South Pacific, State Fair and more! One of home video's most highly requested titles, Cinderella has been officially unavailable since its initial airing on March 31, 1957! This single performance spectacular was viewed by over 115 million people, a television milestone! Musical performances include beloved favorites "In My Own Little Corner," "Impossible" and "Do I Love You (Because You're Beautiful)!" In 1957, Broadway's reigning songwriters and Broadway's brightest new star joined forces to create a new musical version of Cinderella; it's one-night-only broadcast on CBS-TV was viewed by more than 115 million people - the largest audience in the history of the planet! - and an instant legend was born. Julie Andrews, the toast of Broadway for her performance in My Fair Lady, played the title role, joined by a stellar cast of Broadway and television all-stars. Providing a new take on the timeless tale as well as a bounty of beautiful ballads, comedy numbers and waltzes, was the team of Richard Rodgers and Oscar Hammerstein II, already at the top of their game thanks to such musicals as Oklahoma, South Pacific and The King and I. Though Rodgers & Hammerstein's Cinderella has gone through several TV remakes and hundreds of stage productions, the original, magical version vanished after its initial broadcast, never to be seen again. Until now.

17%off
The Slipper and the Rose: The Story of Cinderella
$12.40 Super Savings
Add to Cart