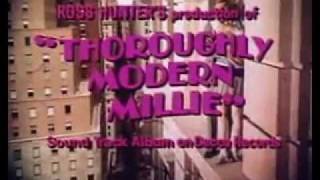 This characteristically spectacular Ross Hunter musical production, a parody of the films of the 1920s, stars Julie Andrews as the eager young Millie Dillmount. She arrives in New York City in the 1920s intent on a job as a secretary with a rich, handsome, eligible boss. Deciding to adopt the appearance of a flapper, she has her hair bobbed. At a women's hotel run by Mrs. Meers (Beatrice Lillie), who also runs a white slavery ring, she meets the beautiful, naive Miss Dorothy (Mary Tyler Moore). Millie does get a job with a handsome boss, Trevor Graydon (John Gavin), but he has eyes only for Miss Dorothy, and Millie is forced to make do with Jimmy Smith (James Fox), a paper-clip salesman. After they've returned to the hotel from attending a party at the Long Island estate of wealthy Muzzy van Hossmere (Carol Channing), Millie finds that Miss Dorothy has disappeared. When she and Jimmy detect the scent of opium in Mrs. Meers's room, they realize she has a sideline. The valiant Jimmy must go in drag to uncover the whereabouts of the white slavers' hideout. The cast and crew perform admirably in this light farce that is almost too sweet for its own good.

THOROUGHLY MODERN MILLIE follows the misadventures of happy-go-lucky Millie, who moves to New York City to become a thoroughly modern flapper and win the heart of a millionaire. But Millie encounters a few obstacles on the road to happiness, including a romantically inclined stockboy, a wealthy best friend with eyes for Millie's handsome boss, and a ring of white slavers who operate out of her boarding house.