...but the devil invented Brigitte Bardot! 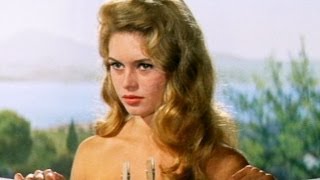 The astounding success of Roger Vadim's And God Created Woman revolutionized the foriegn film market and turned Brigette Bardot into an international star. Bardot stars as Juliette, an 18-year-old orphan whose unbridled appetite for pleasure causes trouble on the French Riviera; her staid husband Michel (Jean-Louis Trintignant) endures beatings, insults, and mambo in his attempts to tame her. A milestone of cinematic naughtiness. French with English Subtitles.

Brigitte Bardot plays a sensuous, orphaned woman who is intimately involved with three men in a small seaside French town, where dark tensions and secrets abound. This sizzling film helped to establish Bardot as an international star and sex symbol; it was the directorial debut of her former husband, Roger Vadim, and also stars Jean-Louis Trintignant and Eric Carradine.