An exercise in poor taste 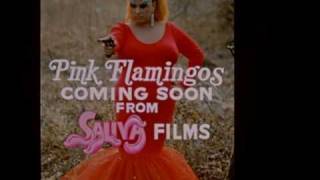 Baltimore director John Waters's outrageous 1971 debut PINK FLAMINGOS burst onto the filmmaking scene like the ample flesh of its drag-queen star through the seams of a lamé dress. Conceived as a way to garner attention for Waters's fledgling career, this paean to bad taste certainly did just that--so much so that decades later, the film still retains the power to shock with its gleeful demolition of every known human taboo.

Filmmaker John Waters exploded into infamy with this darkly comic classic, in which cross-dresser Divine stars as Babs Johnson, a criminal in hiding from the FBI in a trailer outside of Baltimore, Maryland. Accompanying Babs are her mother (Edith Massey), a dim-witted woman who is obsessed with eggs; her son Crackers (Danny Mills); and Cotton (Mary Vivian Pierce), Babs' "travelling companion" and Crackers' co-conspiritor in unwholesome play.

16%off
To Wong Foo, Thanks for Everything! Julie Newmar (DVD)
$8.40 Super Savings
Add to Cart