Firesign Theatre I Think We're All Bozos On This Bus 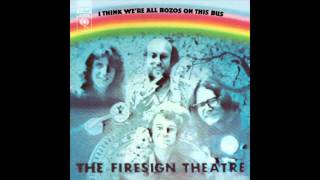 The Firesign Theatre's fourth album cleverly begins with the same sound that ends their third (DON'T CRUSH THAT DWARF, HAND ME THE PLIERS), but it's not a sequel. The marginally more straightforward and linear I THINK WE'RE ALL BOZOS ON THIS BUS takes as its central metaphor those futuristic tram lines that always run through World's Fairs, Disney World, and similar tourist attractions. The main character, another in the Firesign Theatre's long line of Everymen, is a naif called Clem, who wanders haphazardly through the featured attractions of this nameless fantasy land, inadvertently causing confusion wherever he goes. The structure of the story allows for more self-contained, sketch-like pieces that recall the relative simplicity and overt social satire of the group's first two albums, combined with the Joycean free-associative weirdness of the third. As such, it's perhaps the Firesign Theatre's richest and most mature work. Unfortunately, the group would never create something so fascinatingly complex again.

Firesign Theatre - PROFILES IN BARBEQUE SAUCE: The...
$17.98 on Sale
Add to Cart

Exorcism in Your Daily Life: The Psychedelic Firesign...
$17.98 on Sale
Add to Cart

The Firesign Theatre - Anythynge You Want To: Shakespeare's...
$21.98 on Sale
Add to Cart