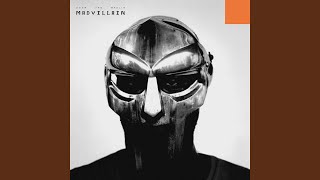 Rolling Stone - p.74
3.5 stars out of 5 - "Madlib's tracks are fuzzy and crackling with dust....As an MC, Doom is a perfect complement. His flow is a particularly elegant slur, with syllables speading over a beat, not crisply adhering to it."
Rolling Stone - p.146
Included in Rolling Stone's Top 50 Records Of 2004 - "[T]wo of the funniest mouths in underground hip-hop..."
Spin - p.66
Ranked #17 in Spin's "40 Best Albums of the Year" - "Madlib's production - thick, woozy slabs of beatnik bass - keeps things hotter than an underground volcano lair."
Entertainment Weekly - 3/19/04, p.66
"Madlib and Doom always tuck surprises into the corners." - Grade: B
Q - p.118
4 stars out of 5 - "Madlib is the most innovative beatsman since Prince Paul and has created an oddball, cartoon-heavy backdrop for Doom's mellifluous wordplay."
CMJ - 3/22/04, p.5
"The entire thing has a muffled vibe somewhere between drunken basement four-tracker experiments, meticulous science experiment and apocalypse...no matter what, these mad scientists are up to no good, and that's damn good."
Mojo (Publisher) - p.114
4 stars out of 5 - "The wily creativity on display here is astonishing....A symphony of such densely constructed chaos, MADVILLAINY's very opacity is part of its brilliance."

Madvillain: Madlib, MF Doom.
Additional personnel includes: Lord Quas, M.E.D., Wildchild, Viktor Vaughn, Stacy Epps.
Personnel: Allah's Reflection, MF Doom (vocals).
Audio Mixer: Dave Cooley.
Recording information: Bionic (2003); Doom's Crib, Atlanta, GA (2003); The Bomb Shelter, Los Angeles, CA (2003).
Illustrator: James Reitano.
Two years in the making, and combining two of the best underground hip-hop artists of the early 2000s, this collaboration between MF Doom and Madlib has been appropriately dubbed MADVILLAINY. With both men known for their stunning soundscapes, rhyming skills, and schizophrenic personalities, the duo decided to have Madlib concentrate on the beats and let Doom handle the lyrics.
In mixing their comic-book-like personas, Madlib and Doom play to their nearly superhuman strengths; while some other collaborations of this caliber seems forced and lop-sided, there is absolutely no filler here--just undiluted beats and rhymes, best exemplified by the singles "America's Most Blunted" and "All Caps." Lib's inventive production leans towards the jazzy side of his repertoire, and Doom unleashes outrageous lyrics on par with his solo efforts (and even his work as Zevlove X in his stint with K.M.D.). Never flashy or glamorous, MADVILLAINY is served straight up, the way hip-hop was meant to be.

Kendrick Lamar
To Pimp a Butterfly
$13.60
Add to Cart

69%off
Gift Of Gab
4th Dimensional Rocketshps Going Up
$4.98 on Sale
Add to Cart

Cutthroat
The Takeova
$10
Add to Cart