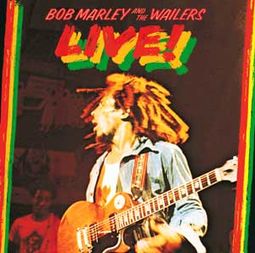 Bob Marley & The Wailers: Bob Marley (vocals, guitar); Al Anderson (guitar); Tyrone Downie (keyboards); Aston "Familyman" Barrett (bass); Crlton "Carly" Barrett (drums); Alvin "Seeco" Patterson (percussion).
Additional personnel includes: Rita Marley, Judy Mowatt, Marcia Griffiths (background vocals).
Reissue producer: Bill Levenson, Maxine Stowe.
Recorded at The Lyceum, London, England on July 17, 1975. Originally released on Island (90032).
All tracks have been digitally remastered.
Personnel: Bob Marley (vocals, guitar); Al Yasha Anderson (guitar); Tyrone Downie (keyboards); Carlton "Carly" Barrett (drums).
Audio Mixer: David Harper.
Recording information: Lyceum, London, England (07/19/1975).
Photographers: Adrian Boot; Bob Ellis; Dennis Morris .
Nobody who likes music could fail to be emotionally moved by this album, and not just because Marley is no longer with us. It was a special live treat before he died. The great thing about this record is the feeling that this is what it was like every night, unlike other live recordings which capture one or two gigs of a tour. Marley was extra special and a giant of popular music. Wallow in this vital record and listen to a man who had something to say and yet had fun while he said it. Most of the tracks you would want to be on the record are here, including the definitive version of 'No Woman No Cry' and a funky 'Lively Up Yourself'.