Sam Cooke Twistin' the Night Away

Get email alerts for Sam Cooke
Out of Print: Future availability is unknown
Notify Me When Available
Add to Wishlist
Format:  Vinyl LP
item number:  6YDK4
Our customers love us! 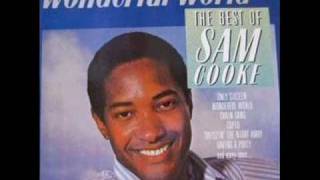 This was one of Cooke's more successful LPs, only his second ever to chart (the first was his 1957 debut long-player), and from here on, all of his albums would sell in serious numbers. Twistin' the Night Away remains one of Cooke's most accessible records, despite the fact that it was a "twist" album, aimed by the producers at cashing in on that craze, and Cooke was shoehorned into doing numbers like "Camptown Twist," "Twistin' in the Kitchen With Dinah," and "Twistin' in the Old Town," as well as his version of Hank Ballard's "The Twist." Around them, the singer is at his most soulful, exciting, and passionate, on the bluesy "Somebody Have Mercy"; the romantic lament "Somebody's Gonna Miss Me"; the ebullient "Sugar Dumpling"; the achingly beautiful, yearning "A Whole Lot of Woman"; the soaring "Soothe Me" (with Lou Rawls); and the slow dance number "Movin' and Groovin' ." One of the great dance albums of its period, but a brilliant soul album as well, which is why it holds up 40 years later. ~ Bruce Eder