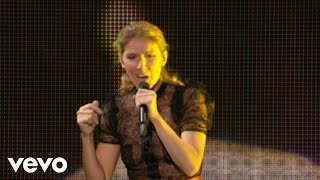 It was quite a gamble when Celine Dion signed a three-year contract to perform in Las Vegas five nights a week. But, an unexpected five years later, with night after night of sold-out performances, it appears her gamble has paid off in spades. Commemorating the end of her blockbuster run, A NEW DAY captures every moment of the stage show, bursting with evocative dancing, flawless singing, and thrilling onstage spectacles. Filmed live at Caesars Palace, this concert release includes stirring renditions of "The Power of Love," "River Deep, Mountain High," "My Heart Will Go On," and many others.

Celine Dion
Celine: Through the Eyes of the World
$16.30
Add to Cart

Celine Dion
Celine: Through the Eyes of the World (Blu-ray)
$26.20 Super Savings
Add to Cart