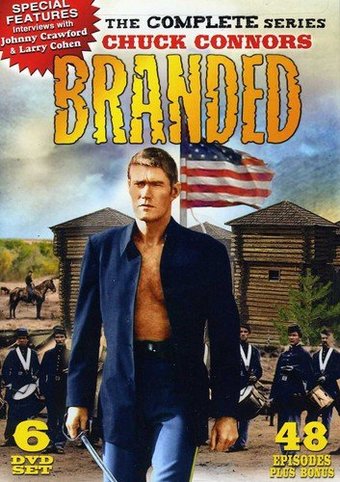 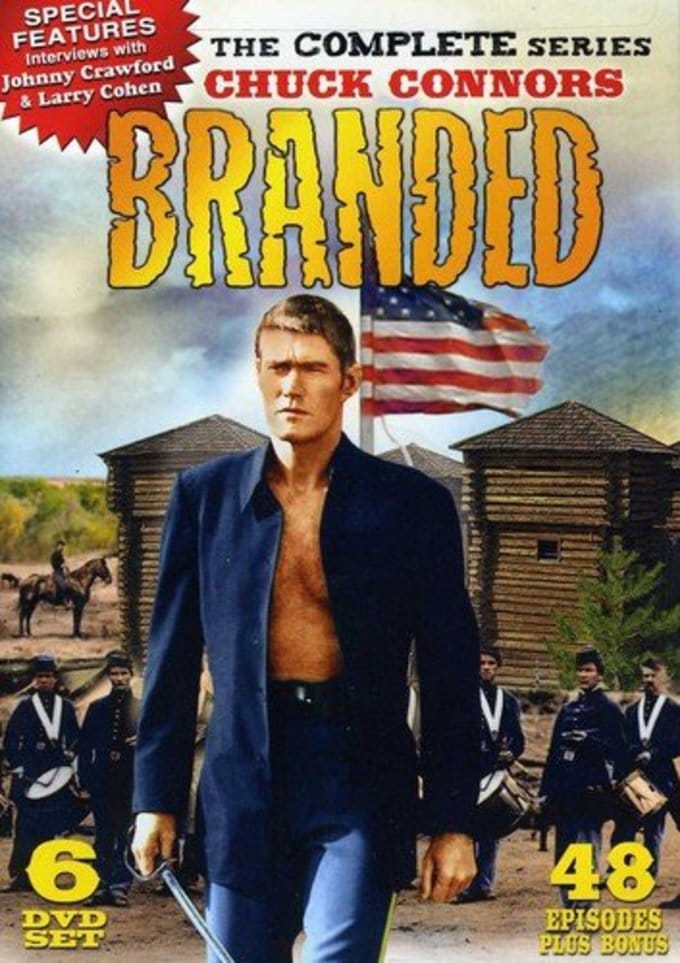 Debuting January 24, 1965 as a midseason replacement for the NBC sitcom THE BILL DANA SHOW, the weekly, half-hour western BRANDED was a variation of a premise popularized on THE FUGITIVE: A man wrongly accused of a heinous crime, wandering throughout the country in hopes of one day proving his innocence and clearing his name. The man in question was Jason McCord (Chuck Connors) a West Point graduate and Cavalry Captain who was the sole survivor of the infamous Battle of Bitter Creek. Each episode began with McCord being dishonorably discharged from the service, his stripes and brass buttons removed and his sword broken in two, as an offscreen chorus sang a ballad, composed by Dominic Frontiere of STAR TREK fame with lyrics by Alan Alch, explaining that McCord had been accused of cowardice and deserting his post under fire. In fact, observed the balladeers, "He was innocent. . .not a charge was true". As we would learn in the course of the series, McCord had been sent off on a secret mission during the Bitter Creek battle, and upon his return he found all his comrades dead--but try proving that to a board of inquiry! Once he'd been cashiered from the Cavalry in disgrace, McCord headed westward, taking various odd jobs (most of them linked with his past experience as a mapmaker and engineer), getting involved in the lives and problems of various strangers, and ever seeking a means to prove that he was not a coward. This proved rather difficult in that McCord met with hostility nearly everywhere he went: It seemed that virtually every person he came across had lost a brother, a father, a son, a husband or a second cousin twice removed at Bitter Creek (leading one to conclude that the battle was even bigger and more momentous than D-Day!) Latching onto to another mid-1960s trend, the espionage series, McCord occasionally went on covert missions at the behest of President Ulysses S. Grant, though the hush-hush circumstance precluded proving his innocence. And during the series' second season, McCord managed to rub shoulders with a number of real-life historical figures, including George Armstrong Custer, Horace Greeley and P.T. Barnum. Created by Harry Cohen and produced by game-show icons Mark Goodson and Bill Todman, BRANDED ran until September 4, 1966. The first 16 episodes were broadcast in black and white; the remaining 32 were shown in color.