The shack is back! 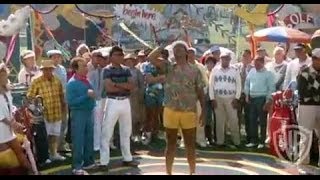 Although Jack Hartounian (Jackie Mason) has made a fortune as a contractor, he must put up a fight so he and his daughter, Kate, can join the exclusive Bushwood Country Club. More than anything, Kate longs to be accepted by the club's rich members, who include her college roommate, Miffy. However, Miffy's parents, Chandler and Cynthia Young, mount a tough campaign to make sure the Hartounians stay out of their beloved club -- and they succeed. To get revenge, Jack buys the majority of Bushwood's stock and transforms the club into an extravagant park open to all. But the club's members still refuse to leave. Eventually, the confrontation can only be solved with a new money versus old money battle on the links.

In this inferior sequel, a construction tycoon is rejectected for membership at the country club. To retaliate for their snobbery, he buys it and turns it into an amusement park. This leads to a confrontation between the slobs and the snobs.