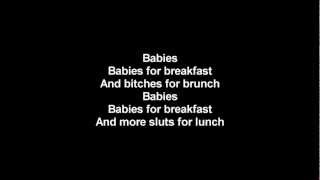 Personnel: Lordi (vocals, background vocals); Tracy Lipp, Clay Vann, Bryan "Lionman" Blumer (background vocals).
Audio Mixer: Michael Wagener .
Recording information: Lordi's Lair, Helsinki, Finland; Stagg Street Studio; WireWorld Studio, Nashville, TN.
Photographer: Petri Haggren.
When theatrical/makeup bands like Alice Cooper and Kiss first appeared on the scene in the early '70s, quite a few journalists wrote them off as having to hide behind a gimmick, claiming that their material wasn't strong enough to stand on its own. Decades later, it's pretty obvious that these scribes didn't know what the heck they were talking about, as those two highly influential artists are still rocking. That said, however, it's hard not to have that same thought pop into your head whenever another new theatrical band appears on the scene, such as Lordi, who have made a career out of elaborate costumes and ghoulish masks. On their fifth studio effort overall, 2010's Babez for Breakfast, the group is back with an album of tunes that seems to be based equally in vintage '80s metal and Rob Zombie's brand of electro metal. Case in point, "Call Off the Wedding" (a tune co-written with former Kiss guitarist Bruce Kulick), which sounds like a power ballad straight out of the 1980s, while such tracks as "Discoevil" and "I Am Bigger Than You" sound like direct descendants of Mr. Zombie. But something that any longtime fan of headbanging music will detect, Lordi have a penchant for coming up with tunes that sound just too darn similar to past compositions by other renowned acts, namely the title track that sounds very much like "Stand Up and Shout" by Dio and "This Is Heavy Metal," which sounds akin to Kiss' "War Machine." Also, it's a bit hard to get past such goofball lyrics as "Babez for breakfast, bitches for brunch" (on the title track), and the group's repeated paeans to the glory of rock and metal ("Give Your Life for Rock 'n' Roll," "Loud and Loaded," etc.) -- but you've got to appreciate a song title like "Granny's Gone Crazy." If you're all about the "shock" in shock rock, then Lordi and Babez for Breakfast may do the trick. If you're looking for more of the "rock" in the equation, be prepared to look elsewhere. ~ Greg Prato

Lordi
The Arockalypse
$10.90
Add to Cart

Hot
Anita Baker
Giving You the Best That I Got
$14.20 on Sale
Add to Cart