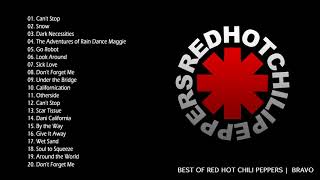 Red Hot Chili Peppers: Anthony Kiedis (vocals); Hillel Slovak, John Frusciante, Arik Marshall (guitar); Flea (bass guitar); Jack Irons , Chad Smith (drums).
A ten-song budget-line compilation released several times over the years with different titles and packaging, The Best of Red Hot Chili Peppers includes highlights from the band's Capitol catalog, which spans Red Hot Chili Peppers (1984) to Mother's Milk (1989). Though brief and far from comprehensive, the ten songs are a good sampler of the band's early years, before the Peppers struck gold with Blood Sugar Sex Magik in 1991. Those early albums aren't as singles-driven as the latter-day ones, so chances are that you'll like the albums proper if you like what you hear here. With the exception of the band's self-titled, formative debut, all of them are good if not great. ~ Jason Birchmeier