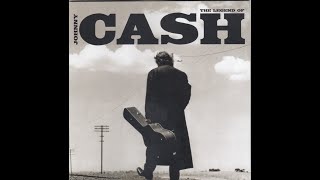 Audio Remasterers: Dana Smart; Gavin Lurssen.
Liner Note Author: Rich Kienzle.
Recording information: San Quentin Prison, CA.
Photographers: Don Hunstein; Jim Marshall ; David Gahr; Les Leverett; Alan Messer.
Not to be confused with the LEGEND box set released around the same time in 2005, THE LEGEND OF JOHNNY CASH is the first single-disc compilation to span the country icon's entire recorded career. Although whittling Cash's massive catalogue down to a single disc is virtually futile, the Hip-O label has done an admirable job, resulting in a well-chosen 21-track history of the late Man in Black.
THE LEGEND OF JOHNNY CASH begins with the singer/songwriter's initial 1950s studio sessions for the revered Sun Records--"Cry! Cry! Cry!" and "Hey Porter"--which confidently introduced the world to Cash's distinctive deep vocals and spare, "boom-chicka-boom" sound. While other career-defining Sun singles are present (most notably, "Folsom Prison Blues" and "I Walk the Line"), Cash's decades with Columbia and his brief stint with Mercury are quickly skimmed over in favor of the numerous tracks from his lauded '90s/'00s American recordings. Stand-outs from that era include his haunting reworking of "Delia's Gone," the swaggering "I've Been Everywhere," and his minimal take on "The Man Comes Around." Though longtime Cash fans will already own most of this material, the collection works wonderfully as a concise introduction to his near-mythic career.

Johnny Cash
The Greatest: The Number Ones (CD)
$7.30 Super Savings
Add to Cart