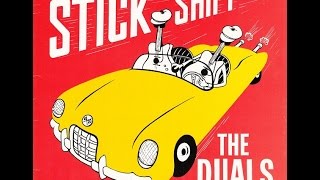 The classic rock & roll album from The Duals, a black instrumental duo from Los Angeles, California.

The Duals: Johnny Lageman, Henry Bellinger.
Includes original release liner notes by Reggie Lavong.
Unknown Contributor Roles: Johnny Lageman; Henry Bellinger.
Two California teenagers scored with this Ventures-like instrumental in the early '60s big enough to cut this follow-up album for the Sue label. It's a ragged blend of instrumentals (90% of which sound like knockoffs of the title track, itself a knockoff of the main riff of "What'd I Say") and a couple of stray glee club-like vocals. This album does have legs with the surf music crowd, however, and will appeal to fans of twangy guitar, which it's loaded with. ~ Cub Koda

54%off
The Royal Teens
Short Shorts And More Golden Classics (CD-R)
$5.98 on Sale
Add to Cart