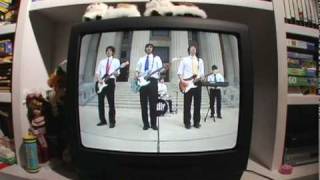 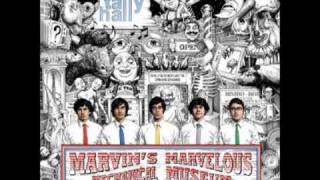 The debut album from the quirky Michigan-based Tally Hall, Marvin's Marvelous Mechanical Museum features the band's rambunctious, playfully literate and often surreal pop. Centered on the four songwriting talents of Rob Cantor, Ross Federman, Joe Hawley, and Andrew Horowitz, Tally Hall often comes off as a precocious barbershop quartet backed by the Raconteurs. In that sense, while the album does evoke such '60s album touchstones as the Beatles' Sgt. Pepper's Lonely Hearts Club Band, the Beach Boys' SMiLE, and the Kinks' The Village Green Preservation Society, primarily it is a modern mix of humorous baroque pop, sincere singer/songwriter moments, deceptively slick garage rock, and even some ironic rap. With that in mind, fans of such similarly minded alt-rock satirists and stylistic omnivores as the Barenaked Ladies and They Might Be Giants should find much to appreciate here. To these ends, it's immediately clear why the leadoff cut "Good Day" won the 2004 John Lennon Scholarship Competition as it's a melodically catchy and sparklingly heady combination of psychedelic rock meets the Buggles. Similarly, such cuts as the power pop inflected "Greener" and "Two WUV" -- a somewhat creepy jokey ode to the Olsen Twins -- make a legitimate bid for the Weezer end of modern rock radio. Throw in a few dewy-eyed adult-alternative ballads like Cantor's "Apathy" that draw well-deserved comparisons to Ben Folds Five, and you have the makings of thoroughly listenable mainstream pop album. That said, a large part of the Tally Hall experience is a defiantly conceptual, utterly theatrical, screwball and, more often than not, epic brand of British music hall inspired pop that may not be everyone's cup of tea. However, for those who connect with the band's off-kilter sense of humor and ambitious glee club rock, Marvin's Marvelous Mechanical Museum may just be the type of place they want to return to time and again. ~ Matt Collar

My Chemical Romance
The Black Parade
$13.10
Add to Cart