The Marx Brothers A Night at the Opera

Don't miss it! The funniest picture ever made! 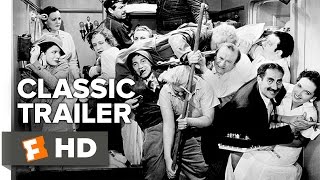 Arts patron Mrs. Claypool intends to pay pompous opera star Lassparri $1,000 per performance. Hey, maybe that's why they call it grand opera! Grand comedy, too, as Groucho, Chico and Harpo cram a ship's stateroom and more with wall-to-wall gags, one-liners, musical riffs and two hard-boiled eggs - all while skewering Lassparri's schemes and helping two young hopfuls (Kitty Carlisle and Allan Jones) get a break. To save the opera, our heroes must first destroy it. And they must also gain ocean passage as stowaways, pull the wool (if not the beards) over the eyes of City Hall, shred legal mumbo-jumbo into a Sanity Clause, pester dowager Claypool (Margaret Dumont) and unleash so much glee that many say this is the best Marx Brothers movie. Seeing is believing.

While DUCK SOUP has risen to become emblematic of the Marx Brothers at their zaniest, A NIGHT AT THE OPERA represents the brothers at their finest. Under the inspired supervision of the boy genius Irving Thalberg, the script was penned by two of Hollywood's wittiest screenwriters, George Kaufman and Morrie Ryskind; the production values are substantially greater than in previous Marx Brothers works; the romantic leads, Kitty Carlisle and Allan Jones, are charming, first-rate stars; the supporting cast, led by Margaret Dumont, Sig Rumann, and Herman Gottlieb, turn in excellent performances; and the bent of the humor is honed from the surreal to a pointed attack on the lifestyles of the wealthy. The circuslike stateroom scene is among the funniest in motion-picture history. Harpo's performance of the hit song "Alone" is perhaps his finest harp solo. Directed by Sam Wood, A NIGHT AT THE OPERA was the Marx Brothers' greatest commercial and critical success.

20%off
The Marx Brothers
A Night in Casablanca (Blu-ray)
$24.10 Super Savings
Add to Cart