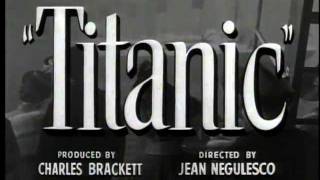 Determined to remove her family from the superficial, high society world in which her husband Richard (Clifton Webb) is engrossed, Julia Sturges (Barbara Stanwyck) boards the R.M.S. Titanic in England on its maiden voyage to America, along with her two children. Learning of her plans, however, Richard purchases a steerage ticket aboard the ship in hopes of reconciling with his family. But when fate, ice and an overzealous ship captain step in, the Sturges family faces an unimaginable challenge - the possibility of separation from one another forever. This classic, based on the true-life history of the famed ocean liner, remains one of the most poignant, well-crafted films of all time.

An unhappily married couple boards the Titanic, while one of their daughters falls in love with a boy from the underclass. But these problems seem small once the iceberg comes along. Academy Award Nominations: 2. Academy Awards: Best Story and Screenplay.

A Hollywood retelling of the tragic sinking of the "unsinkable" British luxury liner H.M.S. "Titanic," which struck an iceberg April 15, 1912, and sank on its maiden voyage, killing over 1500 people. Only 712 of the passengers, using 19 lifeboats, survived. There were a number of famous people traveling on the ship who died, among them, John Jacob Astor and Benjamin Guggenheim.
Taking a personal approach, the film focuses on the Sturges, a family traveling on the luxury liner. Julia Sturges had booked passage on the ship with her two children after leaving her husband, Richard. He, however, discovered her plans, and followed her on board.
Once they set sail, Richard never allowed Julia out of his sight, and unsuccessfully begged for a reconciliation. But then the Titanic hit that deadly iceberg, and the Sturges had to set their differences aside... for the sake of themselves and their children.

National Geographic - Titanic: How It Really Sank
$19
Add to Cart

Titanic In Print And On Screen - An Annotated Guide To...
$35.95 Spring Sale
Add to Cart