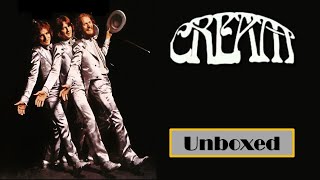 Personnel: Eric Clapton (vocals, guitar); Ginger Baker (vocals, drums); Jack Bruce (vocals).
Liner Note Author: David Fricke.
Cream burst into 1968 with "Sunshine of Your Love" climbing its way toward the top of the charts in America, but commercial success couldn't sustain the power trio for long. Within months, the band agreed to go their separate ways, a decision fueled by the constant fighting between bassist Jack Bruce and drummer Ginger Baker, not guitarist Eric Clapton's desire to pursue a quieter musical direction inspired by his newfound love of the Band. Since they had an album in the works and other contractual obligations to fulfill, a swift split was not in the cards, so the trio decided to go out with a bang, mounting a farewell tour that October. Highlights from their show at the Forum in Los Angeles comprised a side and an additional song of Goodbye, a 30-minute LP rushed into stores early in 1969, but other performances were recorded, too. Goodbye Tour Live 1968 -- a handsome box set released in early 2020 -- features four complete concerts: the Los Angeles performance from October 19, a gig performed the next day at San Diego Sports Arena, and a show given two weeks earlier at Oakland Coliseum, plus the final bash at Royal Albert Hall on November 25.
The original Goodbye LP merely scratched the surface of the source material. While a few tracks came out on 1972's Live Cream, Vol. 2, this box is the first time full concerts from Cream's peak have gotten an official release, and the results are slightly revelatory. Cream didn't switch their sets up that much -- in Oakland, Ginger Baker's showcase arrives on "Passing the Time," but by L.A., he was back to "Toad" -- and they didn't mess with their arrangements, so their performances wound up being excursions in ferocity, velocity, and virtuosity. Clapton may have become the superstar, but it's Bruce and Baker's rubbery rhythms that continually astound: the tension between the two is palpable, clearly driving the pace and tone of Cream's music. As the shows progress, it's possible to hear Cream gain momentum and it all crests on the valedictory Royal Albert Hall show, which may have threadbare audio but also the wildest performance, culminating with a whiplash run through "Steppin' Out," an old Memphis Slim number Clapton used to play with John Mayall & the Bluesbreakers. Listening to it, it's clear Cream went out on a peak, but it's also evident that the tensions between the trio were too great for them to regroup for another tour or album. Thankfully, this fine box preserves their glorious farewell, which happens to double as the best document of the band's on-stage prowess and might. ~ Stephen Thomas Erlewine