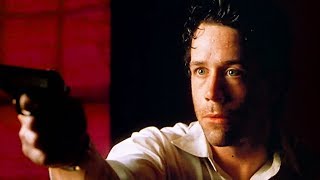 In director Wayne Wang's SLAM DANCE, C.C. Drood (Tom Hulce) is a cartoonist whose wacky sense of humor is good for his job but a disaster in his personal life. He's divorced and behind at work, and he comes home to find his apartment has been ransacked. After a beating by a thug named Buddy (Don Opper) who demands something Drood knows nothing about, he goes to the police, only to discover he's a suspect in a murder. Yolanda (Virginia Madsen), a beautiful, mysterious blonde whom he had an affair with, was killed. After setting up this Hitchcocklike plot--the common man thrown into a dangerous situation--the twists keep coming. The police are no help; they may even be part of a conspiracy against him. Drood's ex-wife, Helen (Mary Elizabeth Mastrantonio), with whom he'd like to get back together, doesn't believe anything he says, and his best friend is even worse. When another dead body turns up, this one in his apartment, he decides that he must investigate for himself. Hulce, who starred as the even wackier Mozart in AMADEUS, has just the right amount of offbeat charm to draw the audience into the mystery.

Not only has C.C. Drood's wife just left, taking their young daughter with her, but his mistress has just been murdered, and the police think he's the killer. As he tries to prove his innocence, he is drawn deeper into a tangled web of scandal, corruption, and murder.

16%off
Scenes from the Class Struggle in Beverly Hills
$12.50 Super Savings
Add to Cart

19%off
Scenes from the Class Struggle in Beverly Hills (Blu-ray)
$20.30 Super Savings
Add to Cart