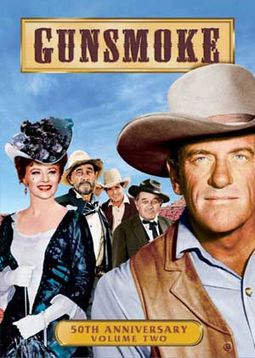 No television program ever captured the courage, character and spirit of the American people like "Gunsmoke," as it blazed a trail of family entertainment excellence during its record-breaking 20-year run. The dangers and challenges of daily life in Dodge City continue in this collectible 50th Anniversary Edition, as Volume Two picks up with the best of seasons 10 through 19. Join Marshal Matt Dillon (James Arness) as he valiantly attempts to tame the wild frontier, along with co-stars Amanda Blake as Kitty, Milburn Stone as Doc, Ken Curtis as Festus, Burt Reynolds as Quint and guest stars that include many of Hollywood's finest.

James Arness vaulted into the annals of television history with his iconic portrayal of U.S. Marshall Matt Dillon in the long-running television Western GUNSMOKE. Armed with a quick draw and an even quicker wit, the principled and intelligent Marshall Dillon brought peace and righteousness to the lawless frontier of 1800s Dodge City with the help of his trusted deputies Chester (Dennis Weaver), Festus (Ken Curtis), Quint (Burt Reynolds), and Newly (Buck Taylor), as well as the support of his friends Doc Adams (Milburn Stone) and Miss Kitty (Amanda Blake). This collection celebrates the 50th anniversary of GUNSMOKE's 1955 premiere with a selection of the Emmy Award-winning series' best episodes.