Barracudas Plane View of The Barracudas 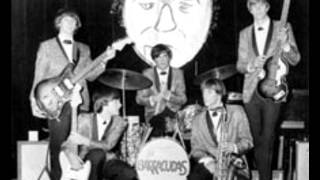 A great set from the Barracudas, one of the best-selling '60s garage/frat bands on the Justice label.

The Barracudas: Mike Parker, Chris Layne, Sam Shaw, Don Thurston, Butch Earnhardt III.
Includes original release liner notes.
Personnel: Charles Burgess Earnhardt II, Michael Anthony Parker, Donald Edward Thurston, Christopher Cooper Layne, George Shaw (vocals).
Liner Note Author: Mark Marymont.
Unknown Contributor Roles: Chris Cooper ; Michael Anthony .
One of the better albums to come out of Calvin Newton's Justice Records label, A Plane View of the Barracudas has been selling for big bucks in Europe for years, partly based on the fact that there weren't many more than a thousand copies pressed. The CD is a welcome addition to the catalog. These boys may have been a little sloppy, but they were ambitious, and they had the skills to realize a lot of those goals. As an extended jam, the version of "I'm a Man" here may be the best rendition this side of the Yardbirds' classic, and adds a few layers of pyrotechnics that Jeff Beck and company weren't ready to ignite; lead guitarist Mike Parker has a field day romping and stomping over the basic material, and Sam Shaw's bass swells and surges beneath Parker's work. Donnie Thurston sounds like he's playing on cardboard boxes, but that's par for the course on a recording like this, and not necessarily a problem. "Shotgun" closes the album and CD, and is a pretty decent cover of a then current soul hit. The notes are minimal, but the music does truly speak for itself. Strangely enough, only their covers of Lennon-McCartney tunes like "I Call Your Name" don't come off too well (though their version of "All My Loving" is pretty cool), but overall, the mix of folk-rock, soul, and blues-rock works beautifully. This must've been a great record to play at dance parties. It's also easy to see why the Barracudas did well on the frat circuit in Virginia and other East Coast locales; they must have been great live. ~ Bruce Eder