Mojo (Publisher): 5 stars out of 5 - "...The musicians arrive at destinations light years from where they started....This music is still right on time..." 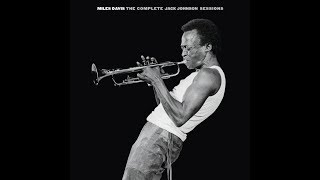 Thanks in great part to the work in the late-1960s of Miles Davis, jazz's premier shape-shifter, the term "jazz-rock" fusion became almost a household phrase. But in 1970, with the release of the LP A Tribute to Jack Johnson, the nonpareil trumpeter-bandleader made an audacious move from jazz-rock to something else again: rock-jazz. Davis (1926-1991), a lifelong boxing fan who often worked out in the ring himself, paid tribute to the first African-American heavyweight champion via an album comprised of just two selections, "Right Off" and "Yesternow." Each filled a side with electrifying sounds as Jack Johnson - the soundtrack for a documentary film - registered a resounding knockout.

On the five discs herein, Davis is joined by a typically astounding crew, made up mostly of the hottest young players, including reedmen Wayne Shorter, Steve Grossman, and Bennie Maupin, keyboardists Chick Corea, Herbie Hancock, and Keith Jarrett, guitarists Sonny Sharrock and John McLaughlin (whose blasting spot at the top of "Right Off" sets the stage for Davis' all-time, hardest-rocking solo), bassists Ron Carter, Michael Henderson, Dave Holland, and Gene Perla, drummers Billy Cobham and Jack DeJohnette, and percussionist Airto Moreira. With producer Teo Macero cutting and pasting masterfully, Davis and Co. create a series of jams that ultimately yield the two extended masterpieces. Rarely is one afforded such an "inside" look at a genius at work. And seldom has genius been captured more tellingly than on The Complete "Jack Johnson" Sessions.

Personnel: Miles Davis (trumpet); Hermeto Pascoal (vocals, whistling, drums); Steve Grossman, Wayne Shorter (soprano saxophone); Bennie Maupin (bass clarinet); Herbie Hancock, Chick Corea (electric piano, organ); Keith Jarrett (electric piano); Sonny Sharrock, John McLaughlin (guitar); Dave Holland (acoustic & electric basses); Ron Carter (acoustic bass); Michael Henderson, Gene Perla (electric bass); Jack DeJohnette, Billy Cobham, Lenny White (drums); Airto Moreira (percussion).
Recorded at Columbia Studios, New York, New York between February & June 1970. Includes liner notes by Miles Davis, Michael Cuscuna and Bill Milkowski.
THE COMPLETE JACK JOHNSON SESSIONS won the 2004 Grammy Award for Best Boxed Or Special Limited Edition Package.
Of all the Miles Davis recordings, the 16 weeks of sessions that created a single, two-selection LP produced by Teo Macero called A Tribute to Jack Johnson have been the most apocryphal. While the album itself was a confounding obscurity upon release -- due to its closeness in proximity to the nearly simultaneous release of the vastly inferior yet infinitely more label-promoted Live at the Fillmore East -- its reputation as the first complete fusion of jazz and rock is cemented. It also garnered a place in the history books for guitarist John McLaughlin, the axis around whose raw, slash-and-burn playing the entire album turns.
The five-CD Complete Jack Johnson Sessions set, covering February 18 to June 4 of 1970, reveals that a revolving cast of musicians entered the Davis/Macero music and sound lab and made a series of mind-bending, often inspired -- yet sometimes maddeningly monotonous -- recording dates, where the creation of backbeat-driven grooves and short, rhythmic, rock- and funk-inflected riffs were the only ideas presented by Davis; everything else flowed freely, for better or worse. No less than five albums have benefited from these sessions: the others include Live-Evil, Get Up with It, Directions, and Big Fun. The two cuts that make up A Tribute to Jack Johnson, "Right Off" and "Yesternow," make up the last two selections on disc five. The arrangement of the session is basically chronological. Thus, there are not only numerous takes of a composition but insertion and remake takes as well. For instance, there are two takes of "Willie Nelson," two inserted "versions," and two remakes, all sequenced here in a row. Likewise is the strange genesis, deconstruction, and rebirth of "Go Ahead John," which appeared in this form on Big Fun. Still, despite the hypnotic grooves where already elongated tunes turn into monolithic groove structures, the historical importance of these sessions and the sheer listening pleasure they provide in doses cannot be overestimated.
There are 17 previously unissued performances here, 14 takes, and alternates that have never been issued in full form! As a small example, the official unearthing of the "Duran" alternate take offers so much more in terms of different instrumentation (many alternates here provide this) and ambience than the circulated version that it is nearly a different tune altogether. The roots of "Right Off" and "Yesternow," which appear on disc three, compare to the final heavily edited versions on the album as startlingly different compositions. Evolution becomes not only the crux of the Davis sessions, but a whole new way of making jazz records. These sides reveal how, decades later, Davis's own playing remains firmly committed to the jazz ideal as a soloist despite the fact that McLaughlin and others such as Bennie Maupin, Chick Corea, Wayne Shorter, Jack DeJohnette, Herbie Hancock, Keith Jarrett, Steve Grossman, Michael Henderson, Ron Carter, Sonny Sharrock, Airto, Dave Holland, and Hermeto Pascoal were essentially playing jam- and groove-based rock.
The role of guitarist Sonny Sharrock is finally defined here. It has previously been discounted and provided endless grist for the Davis rumor mill how he was mixed out of the session. Yes, he was, but so was almost everyone but McLaughlin and Miles at one point or another. Check out Sharrock's killer slide playing that appears on the second inset of "Willie Nelson." For those who worship at the McLaughlin altar, there are the extra minutes of screaming, fuzz-drenched wailing on "Right Off" that were left on the floor by Macero. But this set is full of moments like that, such as the previously unreleased "Sugar Ray," a futuristic look at electronic noise -- with rhythm -- as jazz.
It is true that attempting to listen to this as a box is an admittedly long, arduous, and sometimes difficult task. Taking on individual pieces, in a changer, or even a disc at a time, is a deeply engaging, provocative listening experience. If any recordings needed to be released in order to document the perfect fusion of jazz and rock -- in addition to Miles' musical and studio development -- it's these. ~ Thom Jurek